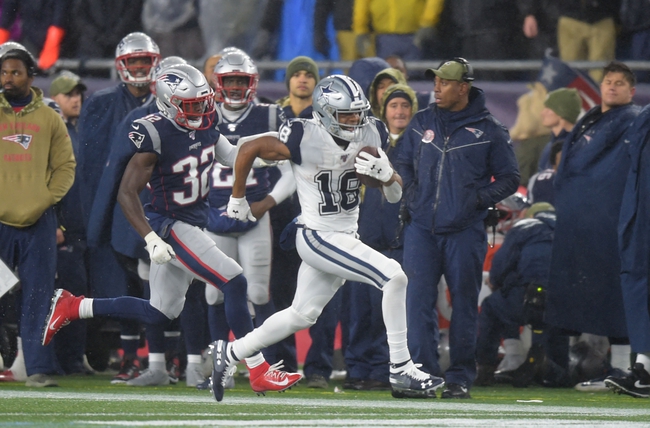 The New England Patriots and the Dallas Cowboys meet in a Madden 20 NFL sim matchup on Tuesday night.

The New England Patriots come into this one looking to build on a 48-18 win over the Green Bay Packers last time out. Tom Brady leads the Patriots at QB in this year’s game with a 91 overall rating with 90 throw power and 96 short pass accuracy while Julian Edelman is number one on the depth chart in New England’s receiving corps at 87 overall with 91 acceleration, 91 agility and 85 catching. James White leads the Patriots’ rushing attack at 83 overall with 89 speed, 92 acceleration and 90 agility. On defense, Stephon Gilmore leads the Patriots with a 98 overall rating with 99 awareness and 92 speed with 94 acceleration and 94 agility while also rated at 98 in man coverage and 96 in zone coverage. Devin McCourty is New England’s second-highest rated defensive back at 92 overall with 93 zone coverage and 90 marks across the board in speed, agility and acceleration. Dont’a Hightower leads New England’s linebacking group at 88 overall with 91 impact blocking and 92 tackling in addition to 93 play recognition and 93 pursuit.

The Dallas Cowboys enter this match looking to build off of a 30-14 win over Atlanta in their last sim appearance. Ezekiel Elliott leads the Cowboys’ offense, rated 93 overall at running back with 90 speed, 91 acceleration and 95 agility while Amari Cooper leads Dallas’ receiving group at 91 overall with 92 speed, 96 agility and 89 catching. Dak Prescott has an 81 overall rating as starting quarterback with 87 throwing power and 88 short pass accuracy. The Cowboys also have some muscle on their offensive line, with Zack Martin owning a team-high 97 overall rating while Tyron Smith is at left tackle at 91 overall. On the defense, Byron Jones and Demarcus Lawrence lead the Cowboys, each at 88 overall apiece, with Lawrence owning a 93 finesse move rating, 89 power move and 88 block shedding rating while Jones has 92 speed, 94 acceleration and 96 agility to go along with an 84 man coverage rating and 90 zone coverage rating in the Cowboys’ secondary.

I think you can make a case for either side here, as New England are what they are, but the Cowboys have really been pouring it on in these sim games as of late whether they know it or not (probably not). Either way, you have two of the better teams in the game, and while this is a high total, I think it could be even higher. I’ll side with the over in this one as I could see it hitting the high 30s on both sides.