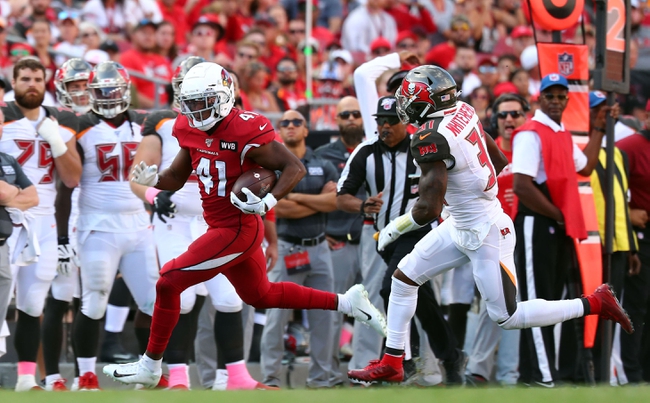 The Tampa Bay Buccaneers and the Arizona Cardinals meet in a Madden 20 NFL simulation game on Wednesday afternoon.

The Tampa Bay Buccaneers come into this one looking to build off of a 45-35 win over the New York Giants last time out. Mike Evans and Chris Godwin lead the Bucs on offense as the top receiving pair on the team with Evans owning a team-high 92 overall rating with 90 catching, 95 catching in traffic and 97 spectacular catch while Godwin is 87 overall with 97 catching. Jameis Winston comes in at 78 overall at starting QB for Tampa Bay in this year’s Madden. On the Buccaneers’ defense, Lavonte David is the leading linebacker with a 90 overall rating, with 92 pursuit, 87 block shedding, 88 impact blocking and 89 tackling. Ndamukong Suh is lined up front at 86 overall with 93 impact blocking and Vita Vea is right behind alongside at 85 overall with 91 impact blocking.

The Arizona Cardinals on the other hand, enter this sim game looking to build from a 21-13 win over Atlanta last time out. Larry Fitzgerald leads Arizona’s offense at 83 overall at wide receiver with a 93 catch rating and 91 catching in traffic while Kenyan Drake sits at 81 overall in the Cardinals’ backfield with 91 speed, 89 acceleration, 90 agility and 87 carrying grades. Kyler Murray is Arizona’s starting QB at 75 overall with 91 speed, 92 acceleration and 90 agility as well as 89 throwing power. On defense, Chandler Jones leads the Cardinals with a 90 overall rating, including 92 power move and an 86 tackle rating while Patrick Peterson is at 92 overall with 92 speed, 92 acceleration, 95 agility and 89 man coverage at CB.

I’m not overly a fan of Arizona as a favorite, as the Cardinals have been most profitable to me when getting points. However, the Cardinals in these sim games have done a good job beating teams they should beat, and while we were making money off of the Bucs early on in the sim games, Tampa Bay has cooled off significantly. I think that Arizona is capable of winning this game by 3-6 points, so I’ll lay the points with Arizona here.