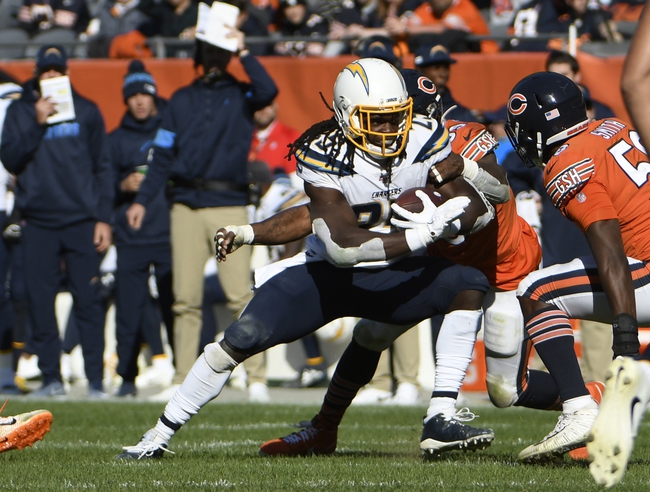 The Los Angeles Chargers and the Chicago Bears meet in a Madden 20 NFL simulation game on Thursday night.

The Los Angeles Chargers come into this game looking to rebound from a 58-17 loss to the San Francisco 49ers in their last sim appearance. Keenan Allen leads the charge for L.A. at 92 overall with 90 catching and 94 catching in traffic in addition to 89 speed, 92 acceleration and 92 agility while Hunter Henry is the top tight end for the Chargers at 87 overall with 89 catching as well. Melvin Gordon III and Philip Rivers aren’t on the Chargers in reality anymore, but they’re still on L.A. in this game at 84 overall with Gordon rated at 92 speed and 92 agility with 90 carrying and 90 juke while Rivers has 94 short pass accuracy and 92 medium pass accuracy. The Chargers’ other top players are on the defensive end, with Joey Bosa leading the defensive push at 91 overall with 90 impact blocking as well as 97 finesse move and 87 strength while Casey Hayward Jr. is at 91 overall in the secondary with 91 acceleration and 92 agility in addition to 89 speed and 90+ ratings in man coverage and zone coverage. Melvin Ingram III and Derwin James Jr. each come in at 88 overall on the defensive end for the Chargers.

The Chicago Bears will try to bounce back from a 17-16 loss to the Buffalo Bills in their last sim matchup. Allen Robinson II leads Chicago on the offensive end with an 89 overall rating with 90 speed and 93 acceleration as well as 96 catching while Trey Burton is at 82 overall at tight end and Taylor Gabriel is an 81 overall rated wide receiver. Tarik Cohen leads the Bears’ backfield at 78 overall while Mitch Trubisky is still Chicago’s starting QB at 73 overall. On D, Khalil Mack leads Chicago with a strong 98 overall rating, with 87 speed and 89 acceleration along with 94 tackling, 90 impact blocking, 91 block shedding, 91 finesse move and 95 power move. Eddie Jackson is rated 89 overall at free safety with a 94 grade in zone coverage and 90 acceleration while Kyle Fuller has 92 speed and acceleration at cornerback with 91 zone coverage and Akiem Hicks is at 88 overall at left defensive end with 91 block shedding and 89 power move.

The Chargers have burned me in their last couple of games, but the fact is I’ve made more than I’ve lost over the course of these sim games by just blindly backing the Chargers. The Bears, despite their stacked defense, have been beaten up on more often than not, and I’m back to a point where I’m not trying to get behind the Bears in these sim games in any capacity. I’ll lay the points with the Chargers by default in this one.

The pick in this article is the opinion of the writer, not a Sports Chat Place site consensus.
Previous Pick
Oakland Raiders vs. Denver Broncos - 6/25/20 Madden20 NFL Sim Pick, Odds, and Prediction
Next Pick
NFL News: Update for 6/26/20