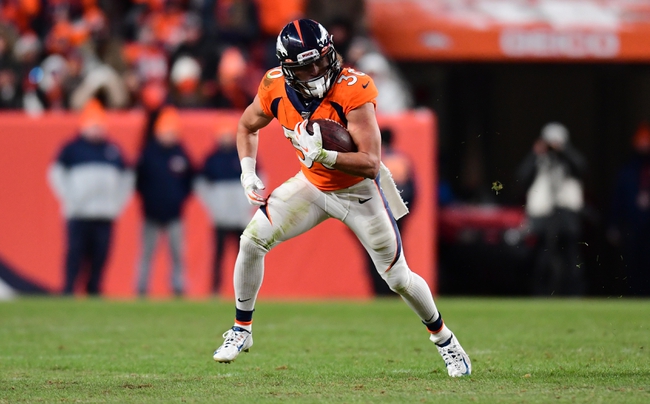 The Denver Broncos and the Oakland Raiders meet in a Madden 20 NFL simulation game on Thursday afternoon.

The Denver Broncos will look to build on a 27-21 win over the Los Angeles Rams in their last sim appearance. Phillip Lindsay leads the Broncos on offense with an 85 overall rating at RB with 93 carrying as well as 93 speed and 91 acceleration. Courtland Sutton is right behind as the Broncos’ top wideout with 89 speed, 92 acceleration and 92 catching as part of his 84 overall rating. On defense, Von Miller leads Denver with a team-high 96 overall rating, including 93 tackling, 89 impact blocking, 90 finesse move and 93 power move. Chris Harris Jr. is at corner at 90 overall with a 91 man coverage rating and 90 speed. Justin Simmons and Kareem Jackson make up a strong combination in the Denver secondary at 89 and 87 overall.

The Oakland Raiders will look to rebound from a 37-35 loss to the New York Giants in their last sim appearance. The Raiders’ strength lies on the O-line with Rodney Hudson at 93 overall, Richie Incognito at 87 overall and Trent Brown at 86 overall. Josh Jacobs and Darren Waller each have 85 overall ratings, with Jacobs owning 96 carrying and 91 acceleration at RB while Waller has 89 speed, 89 acceleration and 96 catching at TE. Tyrell Williams is the Raiders’ top wideout at 82 overall with 92 speed, 93 acceleration and 95 agility while Derek Carr is still the Raiders’ starting QB with an 80 overall rating. On defense, Lamarcus Joyner comes in with an 83 overall rating, including 88 speed and 92 acceleration, but after Joyner, every defender on the Raiders owns a 79 overall rating or lower.

The points with the Raiders are tempting as Oakland’s offense always seems to show up, it’s just the defense that lacks behind. With that said, I’m not going near the Raiders after the way Oakland gagged it up against the Giants and while I’m not huge on Denver in a favorite role as their best work has come as a dog lately, the Broncos are just the easier team to trust here and should be able to get the job done. I’ll lay the points with Denver here.