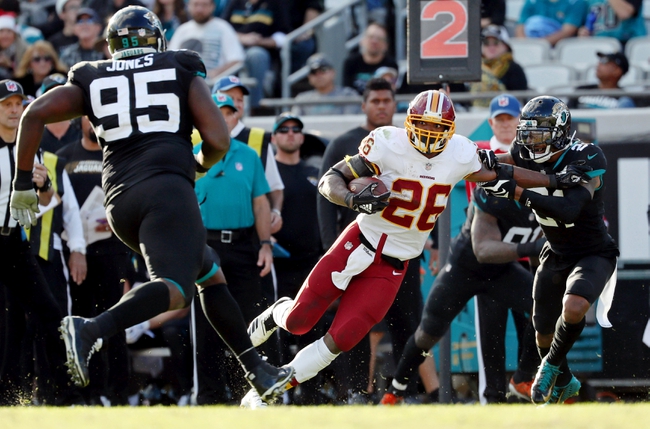 The Jacksonville Jaguars and the Washington Redskins meet in a Madden 20 NFL simulation game on Thursday afternoon.

The Jacksonville Jaguars will look to build on a 23-20 win over Atlanta in their last sim matchup. Leonard Fournette leads the jaguars on offense with an 83 overall rating with 92 speed and 96 carrying. D.J. Chark Jr. sits at 81 overall at wide receiver with 91 catching as well. On the defensive end for Jacksonville, each level of the Jaguars’ defense has a player rated at 84 overall, with A.J. Bouye anchoring the secondary, Telvin Smith in the linebacking corps and Yannick Ngakoue on the defensive line. Bouye owns an 89 speed rating with 94 acceleration and 91 agility while Smith has 87 speed with 89 acceleration and 88 agility.

The Washington Redskins will look to rebound from a 41-24 loss to Detroit in their last sim matchup. Washington’s strength is their o-line, with Trent Williams leading with a 92 overall rating including 95 strength, 92 pass block and 93 run block while Brandon Scherff is 88 overall with 90 run blocking and 92 strength. Jordan Reed leads Washington as their top receiving threat at 84 overall with 87 catching and 87 catching in traffic while Terry McLaurin is at 81 overall and Derrius Guice heads the backfield at 80 overall, sharing the ball carrier work with Adrian Peterson who is at 79 overall. Dwayne Haskins Jr. is the starting QB for Washington despite being rated at just 70 overall. On defense, Matt Ioannidis leads the Washington’s D with an 85 overall rating with 86 acceleration and 86 strength to go along with 84 tackling and 89 power moves while Ryan Kerrigan is at 84 overall at outside linebacker with 88 power move, 88 impact blocking and 86 acceleration.

Call me crazy, but I really don’t want anything to do with either of these two teams even in a sim matchup. Both teams have had their ups and downs and both have had issues as well. With that said, I’m going to side with the under as I see this game having a hard time hitting 50 points let alone what the total is set at. I could see this being a 24-20 or 24-17 kind of game so give me the under in this spot.

The pick in this article is the opinion of the writer, not a Sports Chat Place site consensus.
Previous Pick
Seattle Seahawks vs. Pittsburgh Steelers - 6/24/20 Madden 20 Sim Classic NFL Pick, Odds, and Prediction
Next Pick
NFL News: Update for 6/25/20