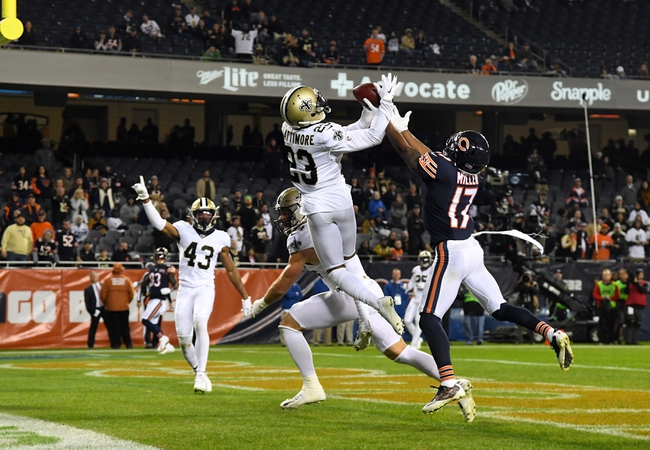 The New Orleans Saints and the Chicago Bears meet in a Madden 20 NFL simulation game on Saturday night.

The New Orleans Saints will look to build on a 34-30 win over the Green Bay Packers in their last sim appearance. Michael Thomas is one of Madden’s five highly-touted 99 overall rated players, with 89 speed, 92 acceleration and 92 agility as well as 99 catching, 98 catching in traffic and 97 spectacular catch with 96 release and 93 jumping. Drew Brees comes in as the starting quarterback for the Saints at 94 overall with 99 short pass accuracy, 97 medium pass accuracy and 91 deep ball accuracy and Alvin Kamara leads the Saints at running back with an 89 overall rating, including 94 acceleration, 93 agility, 90 carrying and 90 juke while Jared Cook is at 87 overall with 90 acceleration and 85 catching. On defense, Cameron Jordan leads New Orleans’ defensive line at 92 overall with 92 impact blocking, 89 tackling and 94 finesse move. Demario Davis is at 89 overall at outside linebacker with 90 play recognition and 90 pursuit as well as 86 speed and 89 acceleration. Marcus Williams and Marshon Lattimore also make up a big chunk of the New Orleans secondary at 86 and 85 overall.

The Chicago Bears on the other hand, will look to bounce back after a 21-19 loss to the Los Angeles Chargers last time out. Allen Robinson II leads Chicago on the offensive end with an 89 overall rating with 90 speed and 93 acceleration as well as 96 catching while Trey Burton is at 82 overall at TE and Taylor Gabriel is an 81 overall rated wide receiver. Tarik Cohen leads the Bears’ backfield at 78 overall while Mitch Trubisky is still Chicago’s starting quarterback at 73 overall. On defense, Khalil Mack leads Chicago with a solid 98 overall rating, with 87 speed and 89 acceleration along with 94 tackling, 90 impact blocking, 91 block shedding, 91 finesse move and 95 power move. Eddie Jackson is rated 89 overall at free safety with a 94 grade in zone coverage and 90 acceleration while Kyle Fuller has 92 speed and acceleration at cornerback with 91 zone coverage and Akiem Hicks is at 88 overall at left defensive end with 91 block shedding and 89 power move.

The points with Chicago could be worth a glance, but I’m back to not being high on Chicago even in these sim games. I know the defense is good and the offense has some pieces, but the Saints have everything the Bears do with just a way better and way more consistent offense. I just think the Saints win this one by double digits, something like 34-23, so I’ll lay the points with New Orleans in this one.