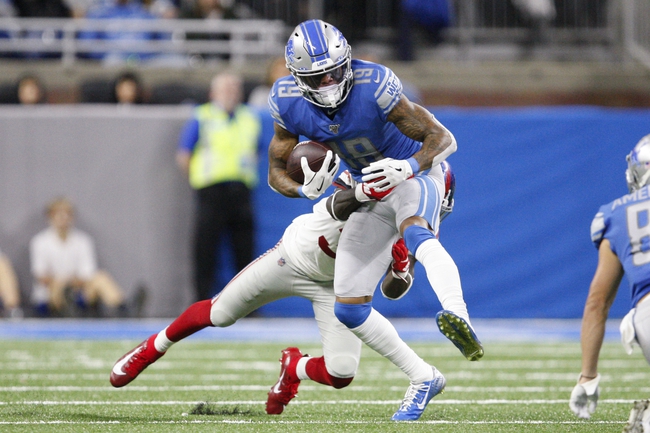 The Detroit Lions and the New York Giants meet in a Madden 20 NFL simulation game on Saturday afternoon.

The Detroit Lions will look to build on a 41-24 win over the Washington Redskins in their last sim appearance. Kenny Golladay and Marvin Jones Jr. are the top receiver duo for Detroit with Golladay at 86 overall and Jones Jr. at 85 overall with both having a 90 speed rating and a low-90s acceleration rating. Matthew Stafford is Detroit’s starting QB with an 82 overall rating, including a 94 attribute rating in throwing power. On the defensive side of the ball, Damon Harrison Sr. leads Detroit with an 89 overall rating, including a 95 grade in impact blocking and 92 in tackling as well as a 91 mark in block shedding. Darius Slay Jr. may not be with Detroit anymore, but he still is on the team here and has high-80s ratings in man and zone coverage as well as low-90s ratings in speed, acceleration and agility.

The New York Giants on the other hand will look to improve on a 37-35 win over the Oakland Raiders last time out. Saquon Barkley leads the G-Men on offense with an 89 overall rating, with 92 speed, 93 acceleration, 96 agility, 94 carrying and 94 juke ratings. Evan Engram leads New York’s receiving group at tight end at 88 overall with 88 catching, 90 speed and 91 acceleration. Golden Tate III and Sterling Shepard make up a good tandem at wide receiver with each logging 90 speed and 91 acceleration with Tate III having 89 catching compared to Shepard’s 88. On defense, Leonard Williams is the only player rated 80+ overall on that side of the ball for the Giants.

The Giants can win as many games as they want to, but it doesn’t change the fact that I’m not going near them with a ten foot pole any time they appear on a board in reality or in simulations. Detroit’s had their ups and downs and aren’t a team I’m looking to back regularly, but their offense has been much more consistent than the Giants and we’ve seen the Lions lay the wood to some teams during these sim games. I’ll lay the points with Detroit here.

The pick in this article is the opinion of the writer, not a Sports Chat Place site consensus.
Previous Pick
NFL News: Update for 6/27/20
Next Pick
New Orleans Saints vs. Green Bay Packers - 6/27/20 Madden20 NFL Sim Pick, Odds, and Prediction