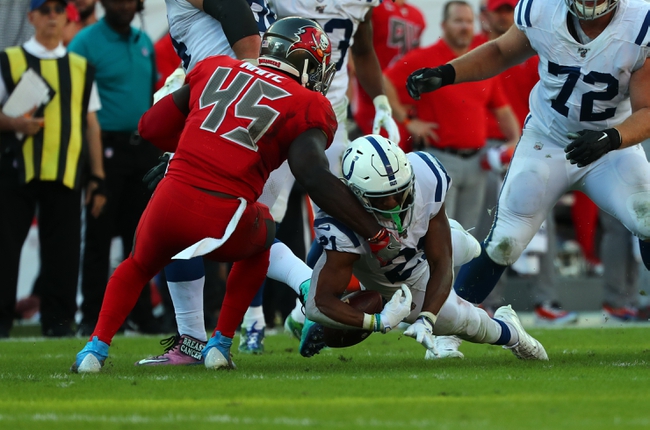 The Indianapolis Colts and the Tampa Bay Buccaneers meet in a Madden 20 NFL simulation game on Saturday afternoon.

The Indianapolis Colts will try to build on a 16-12 win over the Miami Dolphins in their last sim appearance. T.Y. Hilton leads the Colts on offense with an 88 overall rating, with 93 speed as well as 95 agility and 91 acceleration at wide receiver. The Colts also have some strength up front with four offensive linemen with at least an 80 overall rating, led by Quenton Nelson who has a team-high 94 overall rating with a 99 awareness rating as well as 97 strength and 92 run blocking. On the defensive end, Justin Houston leads Indy with an 86 overall rating, including a 93 mark in play recognition while Darius Leonard sits at one of the outside linebacker spots with an 85 overall rating including an 88 rating in tackling.

The Tampa Bay Buccaneers on the other side, come into this one fresh off of a 36-16 win over the Arizona Cardinals last time out. Mike Evans and Chris Godwin lead Tampa Bay on offense as the top receiving duo on the team with Evans owning a team-high 92 overall rating with 90 catching, 95 catching in traffic and 97 spectacular catch while Godwin is 87 overall with 97 catching. Jameis Winston comes in at 78 overall at starting quarterback for Tampa Bay in this year’s edition of Madden. On the Buccaneers’ defense, Lavonte David is the leading defender with a 90 overall rating, with 92 pursuit, 87 block shedding, 88 impact blocking and 89 tackling. Ndamukong Suh is lined up front at 86 overall with 93 impact blocking and Vita Vea is right behind alongside at 85 overall with 91 impact blocking.

I get why the Colts would be favored here, as the Colts have been rolling out wins left and right as of late, but the problem is that we saw the Colts struggle against the Dolphins, and while that may just be the game that was used for the simulation, it’s still a bit alarming as the Bucs can put points on the board in bunches in their own right. I think the Colts win this one, but I think the Buccaneers keep it fairly close, so give me Tampa Bay and the points.