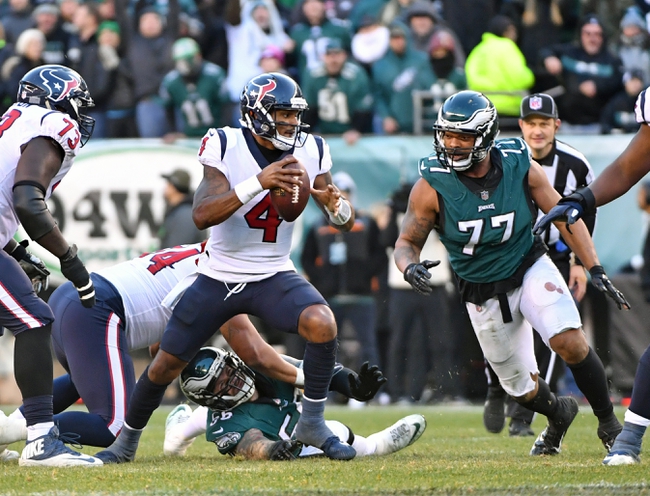 The Philadelphia Eagles and the Houston Texans meet in a Madden 20 NFL simulation game on Sunday afternoon.

The Philadelphia Eagles will try to rebound from a 34-18 loss to the Dallas Cowboys in their last sim appearance. Zach Ertz leads Philadelphia on offense with a 90 overall rating with 87 acceleration and 93 catching while Alshon Jeffery and DeSean Jackson make up the top receiver pairing for the Eagles at 85 and 84 overall respectively. Carson Wentz is starting QB for Philly at 83 overall while the Eagles’ top rated players are on the right side of their offensive line with Jason Kelce at center with a 94 overall rating, Brandon Brooks at 93 overall at right guard and right tackle Lane Johnson at 89 overall. On the defense, Fletcher Cox leads Philly at 95 overall with 95 strength, 93 tackling and 96 power move while Brandon Graham is right defensive end at 87 overall with 90 power move and 93 impact blocking. Malcolm Jenkins leads the Eagles’ secondary at 86 overall with 91 acceleration, 90 agility and 88 zone coverage.

The Houston Texans will look to rebound from a 31-29 loss to the same Dallas Cowboys last time out. DeAndre Hopkins leads the Texans, rated 98 overall with 98 catching as well as 99 marks in catching in traffic, spectacular catch, release and jumping with 92 speed, 93 acceleration and 92 agility. Deshaun Watson is rated at 86 overall at starting QB with 88 acceleration, 84 speed and 89 throw power while Lamar Miller is close behind at 84 overall in the Houston backfield with 91 carrying, 89 juke, 92 speed, 91 agility and 91 acceleration. On defense, J.J. Watt leads at 97 overall with 97 strength, 94 impact blocking, 97 tackling, 93 finesse move and 94 power move. D.J. Reader and Justin Reid also come in at 84 overall for Houston’s defense with Reader on the defensive front and Reid in the secondary.

This is a tough one to call as the Texans have played well in a couple of their recent sim games, while the Eagles have been more consistent but they did just get beat up by Dallas last time out. With that said, side-by-side I just think that the Eagles are the more consistent team in terms of results which is all we care about in these sim games. I’ll lay the points with the Eagles in a game I see Philadelphia winning by a touchdown.