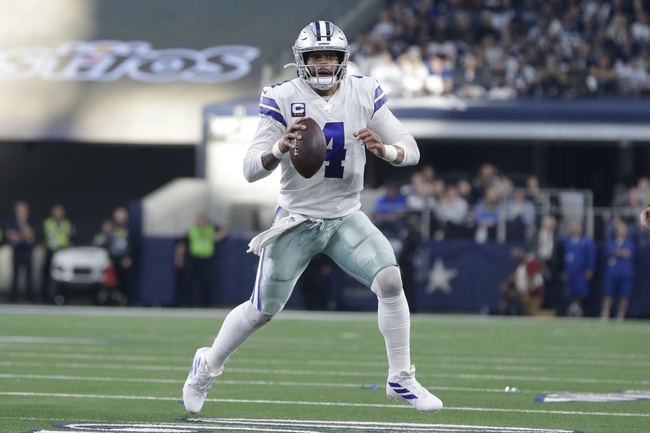 The Dallas Cowboys and the Pittsburgh Steelers meet in a Madden 20 NFL simulation game on Sunday night.

The Dallas Cowboys will look to build off of a 34-18 win over Philadelphia last time out. Ezekiel Elliott leads Dallas on offense, rated 93 overall at RB with 90 speed, 91 acceleration and 95 agility while Amari Cooper leads the Cowboys’ receivers at 91 overall with 92 speed, 96 agility and 89 catching. Dak Prescott has an 81 overall rating as starting QB with 87 throwing power and 88 short pass accuracy. The Cowboys also have some size on their offensive line, with Zack Martin sporting a team-high 97 overall rating while Tyron Smith is at left tackle at 91 overall. On the defensive end, Byron Jones and Demarcus Lawrence lead the Cowboys, each at 88 overall apiece, with Lawrence owning a 93 finesse move rating, 89 power move and 88 block shedding rating while Jones has 92 speed, 94 acceleration and 96 agility to go along with an 84 man coverage rating and 90 zone coverage rating in the Cowboys’ secondary.

The Pittsburgh Steelers will try to rebound from a 40-26 loss to the Seattle Seahawks last time out. JuJu Smith-Schuster leads the Steelers on offense at wide receiver with an 86 overall rating, which includes a rating of 91 speed and 92 acceleration as well as 90 catching and 93 catching in traffic while James Conner is Pittsburgh’s lead running back with an 81 overall rating with 86 speed, 89 acceleration and 89 carrying. Ben Roethlisberger is the starting quarterback with an 81 overall rating with 89 throwing power and 89 short passing accuracy. On the defense, Cameron Heyward leads Pittsburgh rated at 90 overall with 93 strength, 91 tackling and 92 power move while Stephon Tuitt is on the other side of the front at 87 overall with 90 block shedding and 91 strength.

The points with the Steelers are tempting, but the problem that I have with Pittsburgh is that the Steelers have hit some bumps in the road as of late in these sim games. Dallas has been at the top of their game for the most part and this is the best run that the Cowboys have been on since we started covering these sim games. I think this is a game Dallas wins by a touchdown, so I’ll lay the points with the Cowboys in this spot.