The Buffalo Bills and the Miami Dolphins meet in a week 2 AFC East division matchup in NFL action from Hard Rock Stadium on Sunday afternoon.

The Buffalo Bills will look to build on their 27-17 win over the Jets to start the season. Josh Allen threw for 312 yards and two touchdowns on 33 of 46 passing while also rushing for a team-high 57 yards and a TD on 14 carries. Devin Singletary also had 30 rushing yards for the Bills in the victory. Stefon Diggs led the Bills in receiving with 8 grabs for 86 yards while John Brown had 6 catches for 70 yards and a score. Cole Beasley had 4 catches for 58 yards while Zack Moss had a receiving TD out of the backfield. Defensively, Taron Johnson and A.J. Klein each had a team-high 5 total tackles with Mario Addison, Tyrel Dodson and Trent Murphy each logging a sack. Addison had two tackles for a loss as well in the winning effort for the Bills.

The Miami Dolphins will look to rebound from a 21-11 loss to the New England Patriots in their season opener. Ryan Fitzpatrick threw for 191 yards and 3 interceptions on 20 of 30 passing while Myles Gaskin led the Dolphins in rushing with 40 rushing yards while Jordan Howard accounted for the lone touchdown for the Dolphins in the losing effort. DeVante Parker added 4 catches for a team-high 47 yards while Preston Williams had 41 receiving yards. Defensively, Jerome Baker led the Dolphins with 16 total tackles including 13 solo tackles with a sack and a tackle for a loss while Brandon Jones had 10 total tackles. Christian Wilkins had a sack and two tackles for a loss as well in the losing effort for Miami.

Iget why the points are tempting with the Dolphins at home, but even with a limited number of fans, the Dolphins won’t have that home field advantage to give them the extra push in a division game. The Bills kind of took their foot off of the gas against the Jets but for all intents and purposes, the Bills controlled that game pretty much from beginning to end. Miami just looked lost against New England for a good chunk of that game and I just think that the Bills are going to be a legitimate threat in the AFC East this year. After week one, I have more faith in the Bills winning by a touchdown and the Bills were road warriors last year as well, so I’ll take Buffalo and lay the touchdown here. 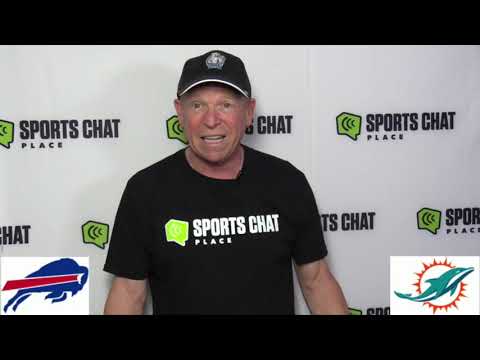