The Carolina Panthers and the Los Angeles Chargers meet in week 3 NFL action from SoFi Stadium on Sunday.

The Carolina Panthers come into this one looking for their first win of the year after a 31-17 loss to Tampa Bay in their last game. Teddy Bridgewater has thrown for 636 yards, a touchdown and 2 interceptions on 72.4% passing while Christian McCaffrey has led the Panthers with 156 rushing yards and 4 touchdowns. Robby Anderson leads Carolina in receiving with 15 catches on his 18 targets for 223 yards and a touchdown while DJ Moore has 12 grabs on a team-high 22 targets for 174 yards. Defensively, Jeremy Chinn leads the Panthers with 15 total tackles including 8 solo tackles while Shaq Thompson has 14 total tackles this season.

The Los Angeles Chargers will look to rebound from a 23-20 overtime loss to the Kansas City Chiefs in their last outing. Justin Herbert was a surprise entrant into his Chargers debut, after a pregame injury to Tyrod Taylor. Herbert, the 6th-overall pick from this past year’s draft, threw for 311 yards, a touchdown and an interception on 22 of 33 passing while also rushing for a touchdown as well. Austin Ekeler had 93 rushing yards to lead the Chargers on 16 carries while Joshua Kelley had 64 rushing yards as well. Keenan Allen led the Chargers in receiving with 7 grabs for 96 yards while Hunter Henry had 6 catches for 83 yards. Jalen Guyton also had a touchdown reception as well for the Chargers in defeat. Defensively, Kenneth Murray Jr. led the Chargers with 10 total tackles including 6 solo tackles while Chris Harris Jr. had 8 tackles and Joey Bosa had a sack as well for L.A.

I get why the total is where it is, but the Panthers have had issues keeping points off of the board in the first couple of weels and the Panthers are also capable of putting some up on the offensive end as well. It’ll be interesting to see how the Charger offense clicks with Herbert at the helm for the foreseeable future, but this is a game that should go over the total. I’ll side with the over as my free play for this game, but my stronger play is on the side and I have that available as a premium pick that you can find here. 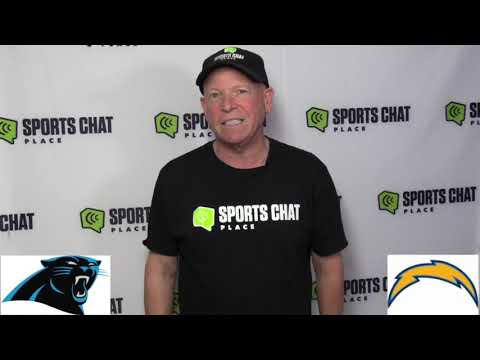