The Buffalo Bills and the Tennessee Titans meet in a week 5 NFL matchup from Nissan Stadium on Tuesday night.

The Buffalo Bills will look to remain unbeaten after improving to 4-0 with a 30-23 win over the Las Vegas Raiders in their last game. Josh Allen has thrown for 1,326 yards, 12 touchdowns and an interception on 70.9% passing while Devin Singletary leads the Bills in rushing with 212 rushing yards and the aforementioned Allen has a team-high 3 rushing TDs already this season. Stefon Diggs leads Buffalo in receiving with 26 catches on 35 targets for 403 yards and a pair of touchdowns while Cole Beasley has 18 receptions for 260 yards. John Brown and Gabriel Davis each have 100+ receiving yards and 2 touchdowns while the aforementioned Singletary has 114 receiving yards as well this season. Defensively, Jordan Poyer leads the Bills with 34 total tackles including a team-high 23 solo tackles while Micah Hyde and Taron Johnson have 28 and 27 total tackles respectively. Mario Addison also has a pair of sacks for the Bills this season.

The Tennessee Titans currently sit at 3-0 after having their last matchup postponed due to a COVID outbreak within the team. Ryan Tannehill has thrown for 809 yards, 6 touchdowns and an interception on 67.3% passing while Derrick Henry has rushed for 319 yards and a pair of touchdowns. Corey Davis has a team-high 15 grabs for 206 yards while Jonnu Smith has 181 receiving yards and 3 touchdowns. Adam Humphries and Kalif Raymond each have 100+ receiving yards for the Titans this year. Defensively, Kenny Vaccaro leads the Titans with 22 total tackles, including 18 solo tackles while Jayon Brown has 20 total tackles this season.

I get that the Titans as a home dog are tempting, but after missing a couple of weeks, you have to wonder if there’s going to be any rust or timing issues between Tannehill and his receivers. The Titans tend to rely on a run-first offense as it is, and that could allow for the Bills to cheat a bit and try to stop the run. I just think the Bills have more balance and have found something with Josh Allen and Stefon Diggs heading the offense. I think the Bills are more than capable of keeping their run going on the road and winning this one by a TD, so I’ll lay the points with Buffalo in this spot.

The pick in this article is the opinion of the writer, not a Sports Chat Place site consensus.
Previous Pick
Tennessee Titans vs Buffalo Bills NFL Pick and Prediction Tuesday 10/13/20 Week 5 NFL
Next Pick
Le'Veon Bell Released: Five Teams To Sign New York Jets Running Back 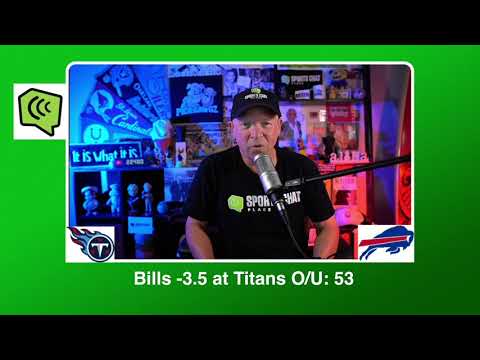