OBJ Out For The Season, What’s Next For The Browns 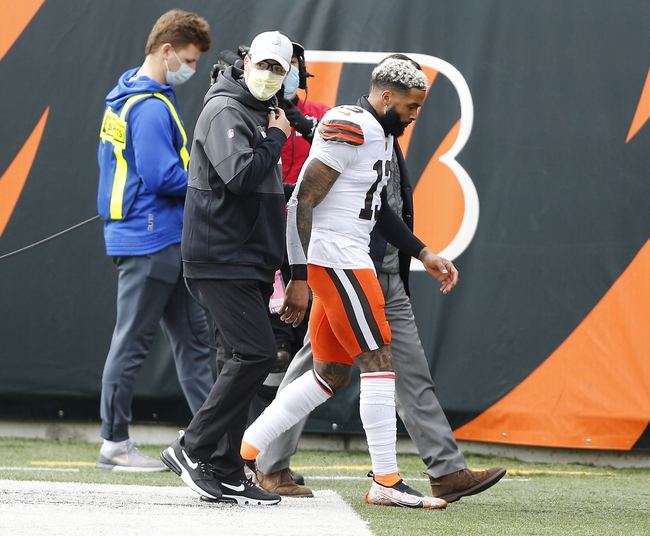 Cleveland Browns wide receiver Odell “OBJ” Beckham has a torn ACL and will be out for the remainder of the NFL season.

At 5-2 the Browns are in the playoff hunt for the first time in a long time, and OBJ is obviously a key piece to the Cleveland offense. Beckham had 319 receiving yards, three touchdowns and led the team with 43 targets. A star wide receiver, there’s obviously no replacing him, but there may be some hope for the Browns moving forward.

What’s next for the Browns?

For one, Baker Mayfield is coming off his best game of the season by far, completing 78.6 percent of his passes for 297 yards and five touchdowns, most of that production coming when OBJ left the field with an injury. Beckham is ridiculously talented, but there’s always a need to kind of force feed the top names rather than playing in the offense. We saw it last season when Beckham and Jarvis Landry had a combined 271 targets and the next mot targeted player was Nick Chubb with 49 targets. OBJ also has a history of showing poor body language when he doesn’t get the ball or things aren’t going well.

Without OBJ, Mayfield can kind of play more free within the offense and just give the ball to whoever is open. While it’s a small sample size, last week’s comeback win over the Cincinnati Bengals was encouraging, and we saw a confident Mayfield for the first time this season.

Jarvis Landry has to return to his Miami Dolphins days where he was the top option and leading the NFL in receptions. Landry has 29 receptions this season for 367 yards and no touchdowns. Landry has never been a big touchdown guy, but he’s as sure handed as they come in the league and is an extremely tough cover on the shorter, quick routes. Landry was the most targeted receiver for the Browns last season and he has to have more of an impact if this team is going to make the playoffs for the first time since 2002.

We also can’t ignore that Rashard Higgins had 110 receiving yards on six catches, catching all six of his targets. Donovan Peoples-Jones caught the game winning touchdown pass in the final seconds, a 24-yard reception that wasn’t easy with the defender in decent position. Tight end David Njoku was highly regarded coming out of Miami and while he’s been an afterthought in this Cleveland offense, three of his 12 receptions the last two years have been touchdowns. There’s talent at the receiver position and the Browns could replace OBJ with a team effort by committee.

Cleveland could also be in the trade market for a wide receiver, and the Houston Texans should be sellers at the deadline. An addition of Randall Cobb, Will Fuller or Kenny Stills would look good right around now. Breshad Perriman has some familiarity with Mayfield and the Jets should be looking to move anybody and everybody. Maybe the Giants do right by Golden Tate and send him to a contender. The Vikings are going through a disappointing season and could listen to offers for Adam Thielen, a year after they traded Stefon Diggs.

There’s options for the Browns if they want to go the trade route.

However, the bottom line is the Browns offense is more than capable of producing without OBJ and some would argue this injury could be a blessing in disguise. Let’s not act like Beckham also hasn’t been in more trade rumors himself the last couple of years. If offensive success was mainly tied to Beckham, there wouldn’t have been whispers of him getting moved.

There’s still hope for the Browns this season in terms of making the playoffs for the first time in nearly two decades.