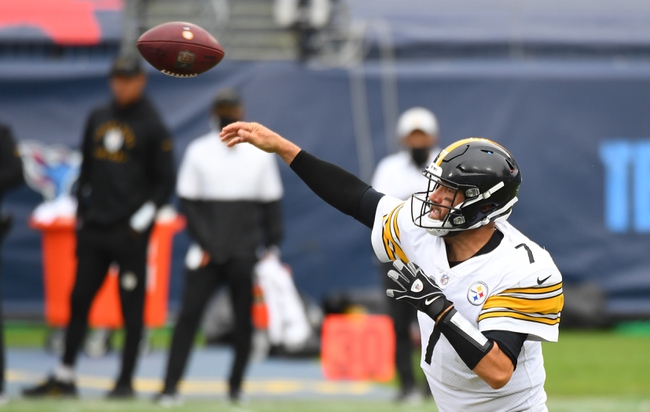 The undefeated Pittsburgh Steelers and the slumping Dallas Cowboys meet Sunday in Week 9 NFL action from AT&T Stadium in Arlington.

The Steelers march into this game undefeated at 7-0. Pittsburgh has had a couple of close calls in their last two victories over the Titans and Ravens, however. As for the Cowboys, they’re flailing at 2-6 this season. Dallas has lost their last three straight versus the Cardinals, Washington and the Eagles. Check back all season long for free NFL picks at Sports Chat Place.

Pittsburgh is quickly becoming a trendy Super Bowl pick with their play over the first seven games. The Steelers dispatched the Giants, Broncos, Texans, Eagles and Browns over their first five games, with three of those wins coming by nine or more points. The last two outings versus Tennessee (27-24) and Baltimore (28-24) have been tougher, but Pittsburgh still got those Ws.

In the win over the Ravens last weekend, Steelers quarterback Ben Roethlisberger posted 182 yards and two touchdowns, while James Conner led the rush on 47 yards and a TD from 15 carries. JuJu Smith-Schuster led the receivers there with seven catches for 67 yards.

Over on the Dallas side, it’s been a difficult season packed with injuries and poor play. Over the last three games, the Cowboys have struggled to find offense with starting QB Dak Prescott gone, posting just 10 points versus the Cardinals, three versus Washington and nine versus the Eagles last weekend.

In the 23-9 loss to Philly, Dallas quarterback Ben DiNucci posted 180 yards on 21-of-40 passing without a TD or interception. Ezekiel Elliott led the Dallas rush with 63 yards on 19 carries, and Michael Gallup posted 61 yards on seven receptions.

PICK: Going Steelers I suppose. The luster on this matchup has worn off over the last few weeks due to the Cowboys’ quarterback injuries, but it doesn’t really matter which backup Dallas has under center; they’re still going to have trouble scoring against Pittsburgh. For the record, it was announced on Tuesday that Andy Dalton will be out again for this one, so Dallas is back on third string at QB. The Cowboys’ defense has struggled as well; they’ve given up 34 or more points five times this year. It certainly looks like a lopsided blowout on paper. I may look at this one again later in the week if the line creeps up, but for now I’m still okay with Pittsburgh on the cover.