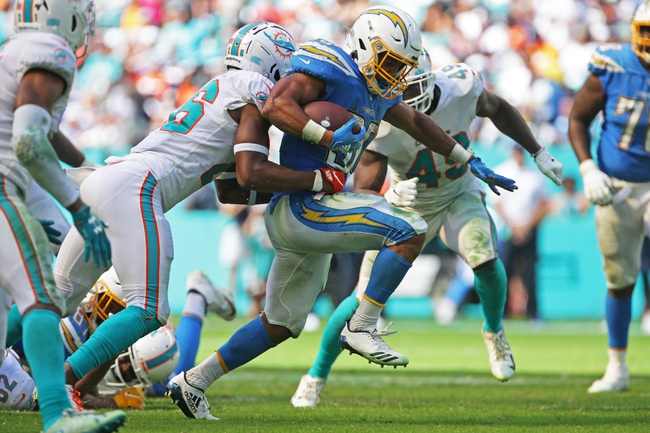 The Los Angeles Chargers and Miami Dolphins meet in a battle of first round draft pick Rookie QB's on Sunday in week 10 NFL action at Hard Rock Stadium outside of Miami.

The Miami Dolphins look for a fifth straight victory to remain in the AFC playoff race. The Miami Dolphins have won four of their last six home games. Tua Tagovailoa is completing 65.4 percent of his passes for 350 yards, three touchdowns and zero interceptions. Tagovailoa enters this game with 52 career pass attempts under his belt. DeVante Parker and Mike Gesicki have combined for 762 receiving yards and five touchdowns while Preston Williams has 18 receptions. The Miami Dolphins ground game is averaging 97.1 yards per contest, and Myles Gaskin leads the way with 387 yards and two touchdowns. Defensively, Miami is allowing 20.1 points and 384.3 yards per game. Jerome Baker leads the Miami Dolphins with 65 tackles, Emmanuel Ogbah has seven sacks and Xavien Howard has four interceptions.

The Los Angeles Chargers have lost all of their games this season by one possession, and it's been the same song and dance with this team, a club that can't finish games or sustain their level of play for 60 minutes. The Dolphins have won four straight with one of the best defenses in the league and a young star quarterback in Tagovailoa who is coming off a brilliant performance in his second career start. The Dolphins are the more complete team here, are riding a wave of momentum and are catching a west coast team on east coast time. You can't confidently back the Chargers with how consistently they blow leads.

Give me the Dolphins and the small chalk.