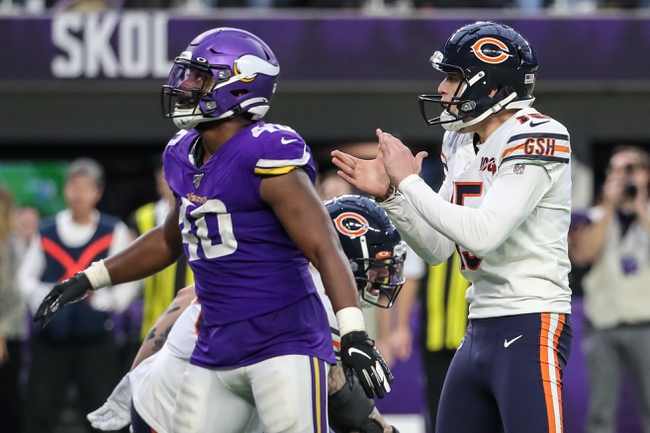 The Minnesota Vikings and the Chicago Bears meet In a NFL North matchup on Monday Night Football as they close out Week 10 NFL action from Soldier Field.

Minnesota comes into this one at 3-5 overall. The Vikings have won consecutive games, taking out the Packers and Lions in important divisional matchups. As for the Bears, they’re 5-4 so far. Chicago has lost their last three games versus the Rams, Saints and Titans. Check back all season long for free NFL picks at Sports Chat Place.

Minnesota’s record looks pretty ugly, but the team would have a winning record right now if not for a couple of close losses. The Vikings have been scoring pretty well most of the year, with at least 23 points in seven of eight games. Minnesota has two losses that have come by just one point (31-30 versus the Titans and 27-26 against the Seahawks), but they’ve also got a couple of blowouts on their resume.

In any case, the Vikings have won their last pair against the Packers 28-22 and Lions 34-20. In the win over Detroit, Minnesota quarterback Kirk Cousins posted 220 yards with three touchdowns and Dalvin Cook led the rush on 206 yards and two scores. Justin Jefferson caught three balls for 64 yards to lead the receivers as well.

Over on the Bears’ side, it’s been a heart-attack season with plenty of twists and turns. After starting out at 5-1 to open the year, Chicago has fallen 24-10 to the Rams, 26-23 in overtime to the Saints and 24-17 to the Titans in a trio of tough losses. Still, Chicago is within striking distance of the NFC North lead, behind only the Packers at 6-2.

In last weekend’s loss to the Titans, Bears quarterback Nick Foles posted 335 yards and two touchdowns, while Allen Robinson had 81 yards on seven receptions. David Montgomery added 30 yards on 14 carries to lead the rush in that one.

PICK: I’m going to stick with the Vikings here, but probably staying away in reality. We’ve seen extremes from both of these teams this year, and neither has been all that consistent from week to week. This one’s going to come down to the running game, as the Vikings will install a heavy dose of Dalvin Cook. Chicago did a good job against Derrick Henry (68 yards on 21 carries) last week so they’re capable of stopping the rush. That said, I think Minnesota has enough offensive weapons to vary it up and power out a cover here. Should be a pretty great matchup regardless, and a fun game to watch.