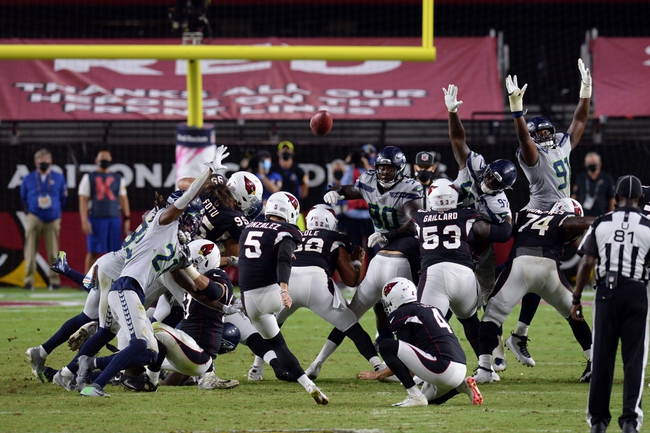 The Arizona Cardinals and Seattle Seahawks meet on Thursday Night Football in week 11 NFC West NFL action at CenturyLink Field in a rematch of a game won by the Cardinals a few weeks ago.

The Seattle Seahawks need a bounce back victory here after losing three of their last four games. The Seattle Seahawks have won six of their last eight home games. Russell Wilson is completing 69.8 percent of his passes for 2,789 yards, 28 touchdowns and 10 interceptions. Wilson has three or more touchdown passes in six of his last nine games. DK Metcalf and Tyler Lockett have combined for 1,497 receiving yards and 15 touchdowns while David Moore has 22 receptions. The Seattle Seahawks ground game is averaging 116.4 yards per contest, and Wilson leads the way with 325 yards and one touchdown. Defensively, Seattle is allowing 29.6 points and 448.3 yards per game. Bobby Wagner leads the Seattle Seahawks with 87 tackles, Jamal Adams has 5.5 sacks and Shaquill Griffin has two interceptions.

The Arizona Cardinals are on cloud nine right now after their miracle win last week over the Buffalo Bills, and while they're playing well, it's going to be interesting to see if this team can again their focus on a short week. The Seattle Seahawks have been awful since their bye week with a 1-3 record and Wilson is coming off a brutal performance where he completed less than 60 percent of his passes and threw a pair of interceptions. The Cardinals are playing the better football and getting a free field goal with them does hold value. However, this feels like a spot where the Seahawks will bounce back, as they're a veteran team and Wilson usually doesn't string together subpar showings.

On a short week, I'll lay the field goal with the Seahawks.