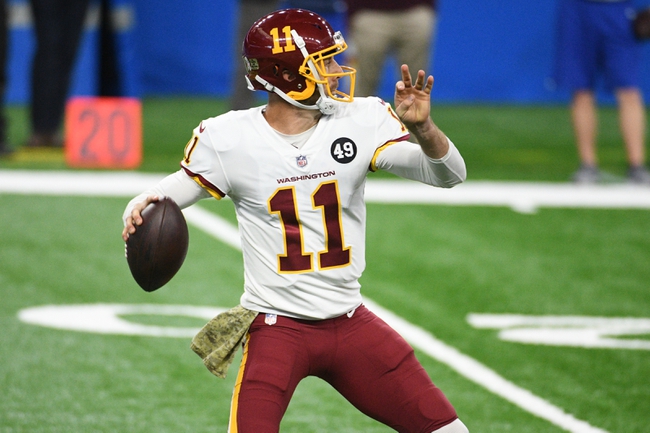 The Washington Football Team play host to the Cincinnati Bengals when they meet on Sunday in Washington in Week 11 NFL action from FedExField.

Cincinnati enters this one at 2-6-1 on the year. The Bengals snapped a three-game losing streak with a win over the Titans, but most recently fell to the Steelers last weekend. As for Washington, they’re 2-7 this season. Washington has lost consecutive games to the Giants and Lions. Check back all season long for free NFL picks at Sports Chat Place.

The Bengals have a few pretty good outings under their belts this season, but for the most part it’s been a forgettable 2020. Cincinnati put together a nice effort against the Titans with a 31-20 win on November 1, but in their last game it was more of the same. The Bengals lost 36-10 to the undefeated Steelers last weekend.

In the loss to Pittsburgh, Cincinnati quarterback Joe Burrow posted 213 yards and a touchdown, while Samaje Perine led the rush with 48 yards on seven carries. Tee Higgins topped the receivers in that one with seven catches for 115 yards and a score.

Over on the Washington side, they won’t be winning any championships this year either, to put it lightly. The Football Team has managed some near-miss efforts though, like a 20-19 and a 23-20 loss to the Giants over the past four weeks. Washington had another tough defeat last weekend, 30-27 against the Lions.

In the loss to Detroit, Washington quarterback Alex Smith threw for 390 yards on 38-of-55 passing, and Terry McLaurin caught seven passes for 95 yards. Tops in rushing was Antonio Gibson with 45 yards and two scores on 13 carries.

PICK: I’m going to stick with the Bengals on this one. You could probably make a case either way however, as this matchup is something of a toss-up. Prior to the Steelers loss, Cincinnati had a pretty good string of offensive output going, posting a combined 92 points across three games. Washington has hit 20 or more in each of the last three games themselves, so this one will probably be a tight and relatively high-scoring affair. (The over might be a good play as well.) I think Cincinnati can eke out a cover with some late-game heroics here. Should be a competitive game at least.