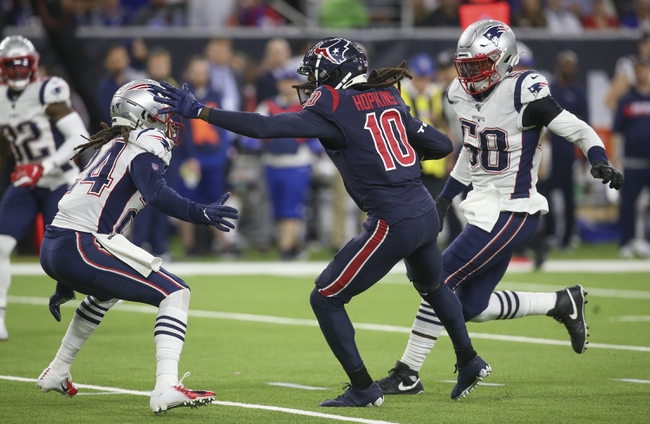 The Houston Texans host the New England Patriots when they meet Sunday in week 11 NFL action at NRG Stadium in Houston.

The Houston Texans could use a big upset win here to rebound from a 2-7 record. The Houston Texans have lost three of their last four home games. Deshaun Watson is completing 68.1 percent of his passes for 2,539 yards, 18 touchdowns and five interceptions. Watson has two or more touchdown passes in six of his last seven games. Will Fuller V and Brandin Cooks have combined for 1,177 receiving yards and nine touchdowns while Randall Cobb has 36 receptions. The Houston Texans ground game is averaging 87.9 yards per contest, and David Johnson leads the way with 408 yards and three touchdowns. Defensively, Houston is allowing 28 points and 409.1 yards per game. Zach Cunningham leads the Houston Texans with 92 tackles, JJ Watt has four sacks and Bradley Roby has one interception.

The New England Patriots are coming off their best win of the season with an upset over the Ravens, and the defense is showing massive improvement over the last few weeks. The Houston Texans are coming off a contest where they scored just seven points and they're nearly the worst rushing team offensively while also being the worst defense at stopping the run. The Texans have a lot of issues, but not being able to run the ball and not being able to stop the run is why they're in the position they're in. You can make a strong argument that the Patriots should be much bigger favorites in this game.

I'll gladly take the Pats and the small chalk here.