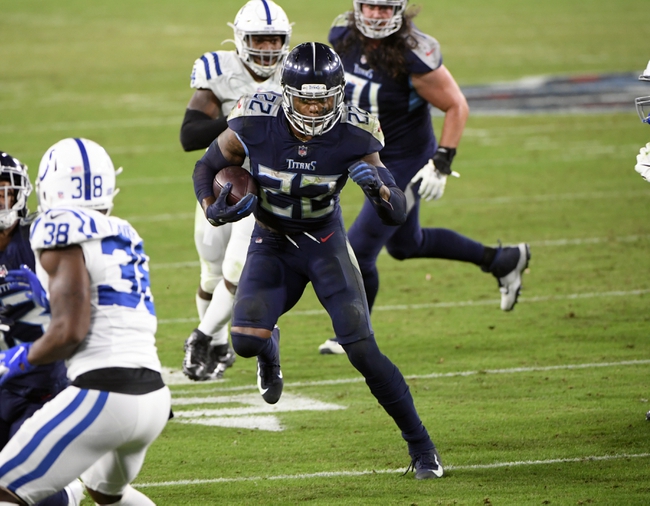 The Baltimore Ravens host the Tennessee Titans as they meet in a playoff rematch in week 11 NFL action from M&T Bank Stadium in Baltimore on Sunday afternoon.

The Tennessee Titans could use a win after dropping 3 of their last 4 games following a 34-17 loss to the Indianapolis Colts in their last game. Ryan Tannehill has thrown for 2,128 yards, 20 touchdowns and 3 interceptions on 64.8% passing while Derrick Henry leads the Titans in rushing with 946 rushing yards and 8 touchdowns. A.J. Brown leads Tennessee’s receiving group with 478 receiving yards and 6 touchdowns while Corey Davis has a team-high 34 grabs for 436 yards and Jonnu Smith has 318 receiving yards with 6 scores as well. Anthony Firkser and Adam Humphries each have 200+ receiving yards and Kalif Raymond has 187 receiving yards as well this season. On defense, Jayon Brown leads the Titans with 73 total tackles including 43 solo tackles while Malcolm Butler has a team-high 49 solo tackles. Harold Landry III leads Tennessee with 2.5 sacks and 6.5 tackles for a loss this season.

The Baltimore Ravens could also use a win, sitting at 6-3 as well with a 23-17 loss to New England last time out. Lamar Jackson has thrown for 1,762 yards, 14 touchdowns and 5 interceptions on 64% passing while also leading the Ravens in rushing with 524 yards and 3 TDs. Gus Edwards and J.K. Dobbins each have 300+ rushing yards with Edwards logging 3 touchdowns to Dobbins’ 2 score and Mark Ingram II has 230 rushing yards for the Ravens this year. Marquise Brown leads Baltimore’s receiving group with 431 receiving yards while Mark Andres has a team-high 33 catches for 358 yards and 5 TDs and Willie Snead IV has 356 receiving yards with 3 touchdowns. Devin Duvernay, Miles Boykin and Nick Boyle each have 100+ receiving yards as well this season. On defense, Patrick Queen leads Baltimore with 61 total tackles including 43 solo tackles while Calais Campbell has a team-high 4 sacks and Matthew Judon has 3 sacks this season. Marcus Peters also has a team-high 3 interceptions this season.

I get Baltimore being favored at home and you have to think the Ravens will be worked hard at practice after coming out flat against the Patriots on national tv in primetime. Not to mention this is a revenge spot for Baltimore given that the Titans upended the Ravens in the playoffs last year and put Baltimore under the magnifying glass for the entire offseason, questioning how good this Baltimore team really was and if they were a legitimate playoff team. However, flat performances have been the story for the Ravens for much of the season and while it’s hard to criticize a team that’s 6-3, the Ravens just don’t look like the same offensive juggernaut from last year’s team that went 14-2 as Lamar Jackson just isn’t as dominant as he was last year. Teams are starting to figure him out and I expect that to be no different with Tennessee. The Titans are 6-3 as well, while also being well coached under Mike Vrabel and a defensive specialist like Vrabel will have something special lined up for Lamar Jackson and this Ravens offense. I just think this is way too many points given how things went down for the Ravens on Sunday night. Give me Tennessee and the points in this game.