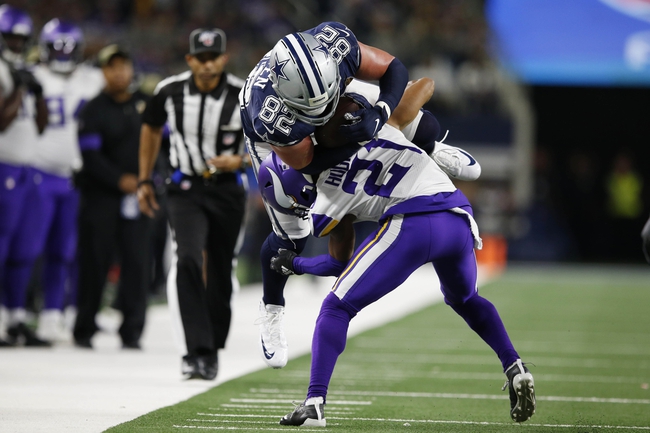 The Minnesota Vikings host the Dallas Cowboys for their meeting on Sunday in Week 11 NFL action from US Bank Stadium in Minneapolis.

Dallas enters this matchup at 2-7 so far. The Cowboys are riding a four-game losing streak, falling to the Cardinals, Washington, the Eagles and the Steelers during that time. As for the Vikings, they’re 4-5 on the season. Minnesota has won three straight games, taking out the Packers, Lions and Bears in big divisional victories. Check back all season long for free NFL picks at Sports Chat Place.

In that difficult loss to the Steelers, Dallas quarterback Garrett Gilbert put up 243 yards with one TD and one interception. CeeDee Lamb had another nice game and led the receivers with 71 yards and a TD off four catches, while Tony Pollard had nine rushes for 57 yards.

Over on the Minnesota side, they’re riding a nice three-game wave after starting out the season at 1-5. During this win streak, the Vikings have notched tough wins against each divisional rival, beating the Packers 28-22, the Lions 34-20 and the Bears 19-13.

In the Monday night win over the Bears, Vikings quarterback Kirk Cousins posted 292 yards with two touchdowns and an interception, while Dalvin Cook rushed 30 times for 96 yards. Justin Jefferson led the receivers in the victory with 135 yards on eight catches.

PICK: I’m going to go with Minnesota here, though there’s not a lot of luster on this matchup by any stretch. The Dallas defense has managed to keep games within relative reach lately, but the offense just can’t score—they’re an injured and ineffective group. The Cowboys have put up just 41 combined points over the last four games, and there’s not much hope for the rest of the season. The Vikings were lackluster against a good Bears defense in their last game and I think they’ll rebound in this one to keep the win streak going.