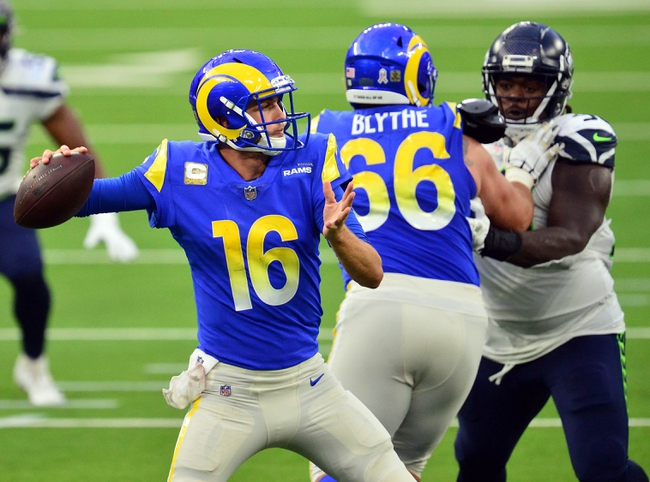 The Los Angeles Rams will look to build off of a 23-16 win over the Seattle Seahawks last time out to pull even atop the NFC West in a 3-way tie at 6-3. Jared Goff has thrown for 2,447 yards, 13 touchdowns and 6 interceptions on 66.4% passing while Darrell Henderson Jr. has rushed for a team-high 486 yards and 4 touchdowns and Malcolm Brown has 347 rushing yards with a team-high 5 TDs. Cooper Kupp leads L.A. with 53 grabs for 577 yards while Robert Woods has 42 catches for 469 yards and a team-high 4 touchdowns. Josh Reynolds has 416 yards while Tyler Higbee and Gerald Everett each have 250+ receiving yards this season. On defense, Micah Kiser leads the Rams with 71 total tackles including a team-high 42 solo tackles while Aaron Donald is 2nd in the NFL with 9 sacks and Leonard Floyd has 7 sacks. Darious Williams has a team-high 4 interceptions as well this season.

The Tampa Bay Buccaneers also could use a win after a 46-23 win over the Carolina Panthers in their last game to improve to 7-3 on the year. Tom Brady has thrown for 2,739 yards, 23 touchdowns and 7 interceptions on 66% passing while Ronald Jones II has a team-high 730 rushing yards and 6 touchdowns on the ground. Leonard Fournette has 244 rushing yards and a pair of touchdowns while Mike Evans leads Tampa Bay’s receiving group with 40 catches for 514 yards and a team-high 8 touchdowns. Scotty Miller and Chris Godwin each have 400+ receiving yards with a pair of touchdowns while Rob Gronkowski has 374 receiving yards and 4 scores. After Gronk, six different Bucs each have 100+ receiving yards as well this season. On defense, Devin White leads Tampa Bay with 88 total tackles including a team-high 56 solo tackles as well as 5 sacks while Shaquil Barrett has 5 sacks of his own and Jason Pierre-Paul has a team-high 7.5 sacks this season. Ndamukong Suh also has 4 sacks while Carlton Davis has 4 interceptions and Mike Edwards has a pair of INTs for Tampa’s defense.

It almost feels like any total below 50 is a bit low for two teams that possess offenses like the ones that the Rams and Bucs have. However, the Rams have played to the under in six straight and as good as the offenses have been, these are also two of the more underrated defensive units in the NFL this season. I could easily see a 24-21 or 24-20 type of game for this primetime showdown, so I’ll lean towards the under in this game.