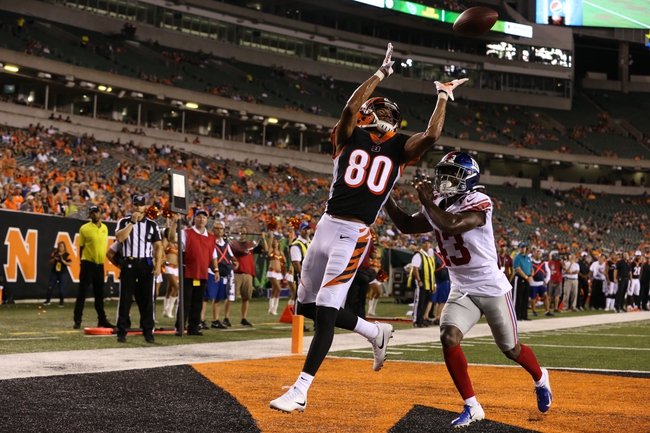 The Cincinnati Bengals host the New York Giants when they meet in week 12 NFL action from Paul Brown Stadium in Cincinnati on Sunday afternoon.

The New York Giants will come into this game rested after their bye week, sitting tied for the division lead with a 3-7 record in the NFC East after back-to-back wins following a 27-17 win over the Philadelphia Eagles last time out. Daniel Jones has thrown for 2,122 yards, 8 touchdowns and 9 interceptions on 63.5% passing while also leading the Giants in rushing with 384 rushing yards. Wayne Gallman has 275 rushing yards with a team-high 5 touchdowns while Devonta Freeman and Alfred Morris each have 100+ rushing yards this season. Darius Slayton leads the Giants with 38 catches on 64 targets for 584 receiving yards and 3 TDs while Evan Engram has 38 grabs for 347 yards. Sterling Shepard and Golden Tate each have 250+ receiving yards while Dion Lewis has 106 receiving yards this season. On defense, Blake Martinez leads the Giants with 96 total tackles including a team-high 56 solo tackles while Leonard Williams has a team-high 5 sacks and Dexter Lawrence and Kyler Fackrell each have 3 sacks this season. James Bradberry also has a team-high 3 interceptions for the G-Men this season.

The Cincinnati Bengals will look to bounce back after suffering multiple losses in a 20-9 loss to Washington, falling to 2-7-1 last time out. Joe Burrow threw for 2,688 yards, 13 touchdowns and 5 interceptions this season but is now out for the season with a torn ACL and MCL. Joe Mixon leads the Bengals with 428 rushing yards and 3 rushing TDs but he is also on the injured reserve with a foot injury and won’t play here. Giovani Bernard has 191 rushing yards while Tyler Boyd leads Cincinnati in receiving with 69 catches for 710 yards and 3 TDs and Tee Higgins has 629 receiving yards and a team-high 4 receiving touchdowns this season. A.J. Green has 357 receiving yards while Bernard and Drew Sample each have 200+ receiving yards on the year as well. On defense, Vonn Bell leads Cincinnati with 74 total tackles while Jessie Bates III has a team-high 45 solo tackles and a team-high 3 interceptions. Logan Wilson has a pair of INTs and Carl Lawson leads the Bengals with 4.5 sacks this season.

Yeesh. This was a bad game to begin with, but now no Joe Burrow for the Bengals and no Joe Mixon as well just makes the Bengals hard to back in this spot. The problem with the Giants is that they’ve covered a lot, including a 6-1 mark ATS in their last 7 games, but the one in that 6-1 record was the only time this season that New York was favored on the year and were two-point favorites in that game, only winning by one against Washington. New York also hasn’t won a game outside of their division this season. With that said, the Giants are still the healthier team here and while I’m not a Daniel Jones fan, I think he’s better than whatever the Bengals are going to throw out there. I think the Bengals are auto-fade for the rest of the season, so I’ll lay the points with New York on the road in this game.