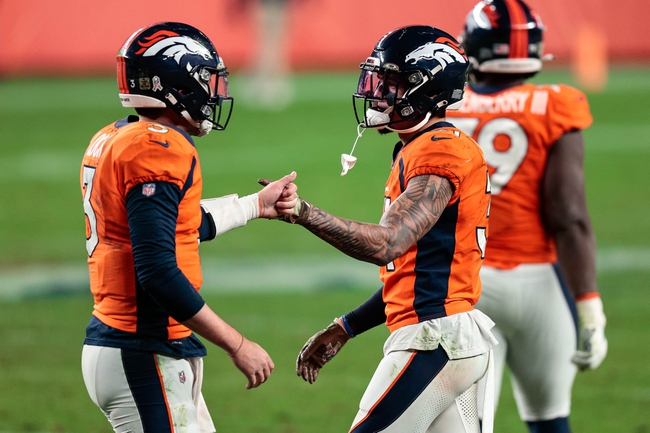 The Denver Broncos host the New Orleans Saints for their meeting Sunday in week 12 NFL action at Empower Field at Mile High in Denver.

The Denver Broncos look for another upset win after splitting their last eight games. The Denver Broncos have lost three of their last five home games. Drew Lock is completing 55.6 percent of his passes for 1,767 yards, seven touchdowns and 11 interceptions. Jeff Driskel and Lock have combined for 10 touchdown passes and 13 interceptions this season but there aren't any QB's on the Broncos roster. Jerry Jeudy and Tim Patrick have combined for 1,152 receiving yards and five touchdowns while Noah Fant has 39 receptions. The Denver Broncos ground game is averaging 114.8 yards per contest, and Melvin Gordon III leads the way with 523 yards and six touchdowns. Defensively, Denver is allowing 22 points and 349.8 yards per game. Alexander Johnson leads the Denver Broncos with 84 tackles, Bradley Chubb has 6.5 sacks and Justin Simmons has four interceptions.

The New Orleans Saints haven't lost in two months and the defensive effort has improved, as they've allowed an average of 8.3 points in their last three games. The Denver Broncos have had issues with consistency this season, but Lock is coming off one of his better games of the season and they just beat a solid Dolphins team. The Broncos have now won two straight at home. The Saints are obviously the better team here, but you're being asked to lay a touchdown with Taysom Hill at quarterback on the road in a tough venue against a Denver defense that gets the quarterback. If the Broncos can rush Hill the same way they did against Tagovailoa, they can have success in this game.

I want the points with the Broncos.