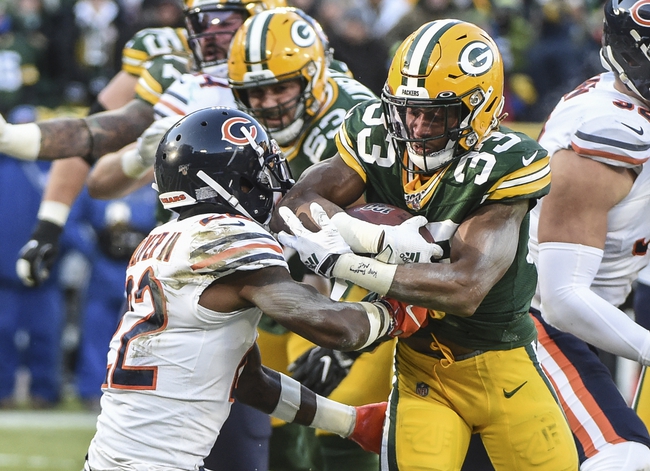 The Green Bay Packers host the Chicago Bears for their showdown on Sunday Night Football in week 12 NFL action at Lambeau Field in Green Bay.

The Chicago Bears are coming off a bye week and need a win to snap a four-game losing streak. The Chicago Bears have won three of their last five road games. Nick Foles is completing 65 percent of his passes for 1,852 yards, 10 touchdowns and eight interceptions. Foles and Mitchell Trubisky have combined for 16 touchdown passes and 11 interceptions this season. Allen Robinson II and Darnell Mooney have combined for 1,106 receiving yards and five touchdowns while Anthony Miller has 34 receptions. The Chicago Bears ground game is averaging 78.2 yards per contest, and David Montgomery leads the way with 472 yards and one touchdown. Defensively, Chicago is allowing 20.9 points and 340.1 yards per game. Roquan Smith leads the Chicago Bears with 96 tackles, Khalil Mack has 6.5 sacks and Tashaun Gipson Sr. has two interceptions.

The Chicago Bears have had an extra week to prepare for this game, and while they're riding a four-game losing streak, four of their five losses on the season have been decided by eight or less points. The Green Bay Packers didn't play a lick of defense in their overtime loss agains the Colts, and they've now allowed 28 or more points in four of their last eight games. The Bears have issues scoring, but their defense keeps them in games, and the Packers aren't good enough defensively to trust with big chalk. Also, each of the last five meetings between the Bears and Packers have been decided by eight or less points. Eight of the last 10 meetings overall have been decided by single digits.

Give me the Bears and the free points.