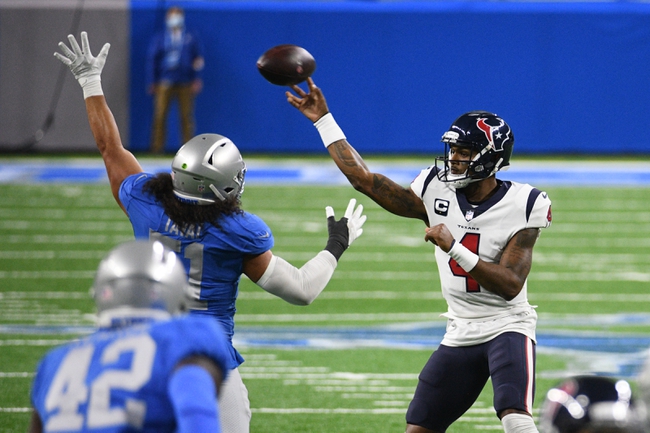 The Houston Texans square off with the Indianapolis Colts in an AFC South division matchup in week 13 NFL action from NRG Stadium in Houston on Sunday afternoon.

The Indianapolis Colts will look to bounce back after a 45-26 loss to Tennessee in their last matchup to fall to 7-4 on the year. Philip Rivers has thrown for 2,978 yards, 16 touchdowns and 9 interceptions on 67.3% passing while Jonathan Taylor leads the Colts in rushing with 518 rushing yards and 4 TDs. Jordan Wilkins and Nyheim Hines each have 200+ rushing yards as well for the Colts this season. T.Y. Hilton leads Indianapolis in receiving with 408 yards while Zach Pascal has 407 receiving yards and the aforementioned Hines has a team-high 44 grabs for 362 yards and 4 scores. Michael Pittman Jr. and Mo Alie-Cox each had 300+ receiving yards while three more Colts have 200+ receiving yards. On defense, Darius Leonard leads the Colts with 80 total tackles including 54 solo tackles while Denico Autry has a team-high 6 sacks and Justin Houston has 4.5 sacks. Kenny Moore II, Julian Blackmon and Xavier Rhodes each have a pair of interceptions this season for Indy.

The Houston Texans will look to build on back-to-back wins after improving to 4-7 on the year after a 41-25 win over Detroit last time out. Deshaun Watson has thrown for 3,201 yards, 24 touchdowns and 5 interceptions on 68.9% passing while also rushing for 293 yards and a pair of touchdowns this season. David Johnson leads Houston’s running backs with 408 rushing yards and 3 TDs while Duke Johnson has 201 rushing yards this season. Will Fuller V leads Houston’s receiving group with 53 grabs for 879 yards and 8 scores, but will miss the next 6 games because of a PED violation. Brandin Cooks has 719 receiving yards with 52 catches and 3 touchdowns while Randall Cobb has 441 receiving yards and 3 scores with 38 grabs. Darren Fells and Jordan Akins each have 275 receiving yards with Fells adding 3 touchdowns this season. On defense, Zach Cunningham leads the Texans with 110 total tackles including a team-high 71 solo tackles and 3 sacks while J.J. Watt and Whitney Mercilus each have 4 sacks to lead Houston in that department.

I was leaning towards Houston and the free field goal at home as Houston’s stepped up their play in the last couple of weeks and Deshaun Watson is really coming on lately. The problem for the Texans is that Will Fuller V getting suspended is big for this team as he was Watson’s favorite target and there’s not much else going on for Houston in terms of skill players. Indianapolis is still in a dogfight for playoff positioning and the Colts have owned the Texans both overall ATS and in Houston in recent years and I just have a feeling that the Colts win this one by 4-6 points. I’ll lay the points with Indianapolis in this one.