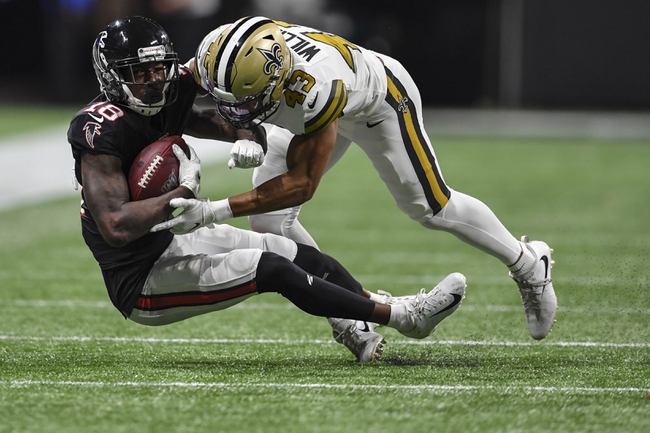 The Atlanta Falcons battle it out with the New Orleans Saints in a week 13 NFC South division matchup in NFL action from Mercedes-Benz Stadium in Atlanta on Sunday afternoon.

The New Orleans Saints will look to add to their current eight-game winning streak after a 31-3 win over Denver last time out. Drew Brees has thrown for 2,196 yards, 18 touchdowns and 3 interceptions on 73.5% passing but will continue to miss time due to injury, leaving the reins to Taysom Hill who has thrown for 397 yards and an interception on 70.5% passing while rushing for 279 yards and 5 touchdowns. Alvin Kamara leads the Saints in rushing with 585 rushing yards and 8 touchdowns while also leading the Saints in receiving with 646 receiving yards, 68 catches and 4 touchdowns. Latavius Murray has 551 rushing yards with 4 TDs while Emmanuel Sanders has 417 receiving yards with 3 TDs. Tre’Quan Smith has 321 receiving yards with 3 TDs and Jared Cook has 285 receiving yards and 4 touchdowns this season. On defense, Demario Davis leads the Saints with 75 total tackles including 52 solo tackles while Marcus Williams and Janoris Jenkins each have 3 interceptions. Trey Hendrickson leads New Orleans with 9.5 sacks while Cameron Jordan has 6.5 sacks and David Onyemata has 5 sacks this season.

The Atlanta Falcons will look to build some steam after a 43-6 win over Las Vegas last time out. Matt Ryan has thrown for 3,163 yards, 17 touchdowns and 8 interceptions on 64.9% passing while Todd Gurley II leads the Falcons on the ground with 610 rushing yards and a team-high 9 touchdowns. Brian Hill has 316 rushing yards as well for Atlanta while Calvin Ridley leads the Falcons with 797 receiving yards and 7 touchdowns on 54 catches. Julio Jones has 45 grabs for 677 yards while Russell Gage and Hayden Hurst each have 450+ receiving yards this season. On the defensive side of the ball, Foyeade Oluokun leads the Falcons with 74 total tackles while Keanu Neal has a team-high 52 solo tackles. Deion Jones has a team-high 3.5 sacks while Grady Jarrett and Charles Harris each have 3 sacks this season.

I get that the Falcons have been playing better under Raheem Morris, going 4-2 SU, which still feels weird to say about Raheem Morris. However, New Orleans just beat the Falcons comfortably two weeks ago with Taysom Hill at QB, and while the Saints haven’t had a tough schedule lately, the Saints are simply the better team which is sad to say considering how much talent is on this Atlanta roster. I’ll lay the points with New Orleans in this one.