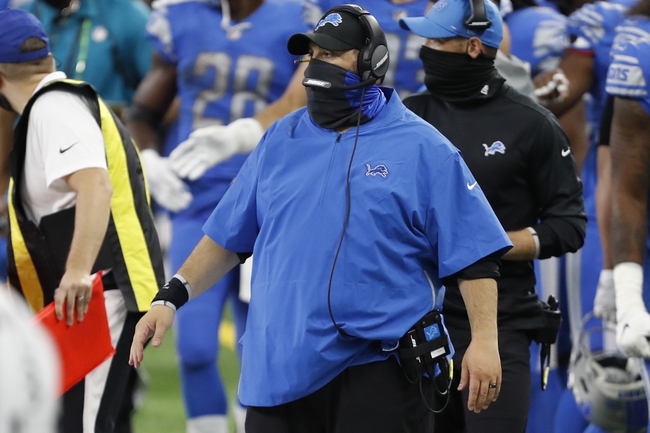 The Chicago Bears  go toe to toe with the Detroit Lions Sunday in week 13 NFC North NFL action at Soldier Field in Chicago.

The Detroit Lions could use a win here after losing four of their last five games. The Detroit Lions have split their last six road games. Matthew Stafford is completing 63.2 percent of his passes for 2,876 yards, 18 touchdowns and eight interceptions. Stafford has eight touchdown passes in his last five games. TJ Hockenson and Marvin Jones Jr. have combined for 1,033 receiving yards and 10 touchdowns while Danny Amendola has 28 receptions. The Detroit Lions ground game is averaging 96.6 yards per contest, and Adrian Peterson leads the way with 444 yards and four touchdowns. Defensively, Detroit is allowing 29.8 points and 396.2 yards per game. Jamie Collins Sr. leads the Detroit Lions with 82 tackles, Romeo Okwara has six sacks and Duron Harmon has two interceptions.

The Chicago Bears need a win here to snap a five-game losing streak. The Chicago Bears have lost three of their last four home games. Nick Foles is completing 65 percent of his passes for 1,852 yards, 10 touchdowns and eight interceptions. Foles and Mitchell Trubisky have combined for 19 touchdown passes and 13 interceptions this season. Allen Robinson II and Darnell Mooney have combined for 1,214 receiving yards and seven touchdowns while Anthony Miller has 37 receptions. The Chicago Bears ground game is averaging 82.2 yards per contest, and David Montgomery leads the way with 575 yards and one touchdown. Defensively, Chicago is allowing 22.7 points and 344.9 yards per game. Roquan Smith leads the Chicago Bears with 101 tackles, Khalil Mack has 6.5 sacks and Tashaun Gipson Sr. has two interceptions.

The Detroit Lions have one of the worst defenses in the league and are watching their season fall apart before their eyes, but in what world should the Bears being laying chalk given their current form? The Chicago Bears are a mess all across the board and have lost five straight games. The Lions have actually played their best football this season on the road and they just fired head coach Matt Patricia. A lot of times teams respond better after a coach is fired for a number of reasons. I'm not thrilled to get behind the Lions here, but laying chalk with the Bears isn't an option for me.