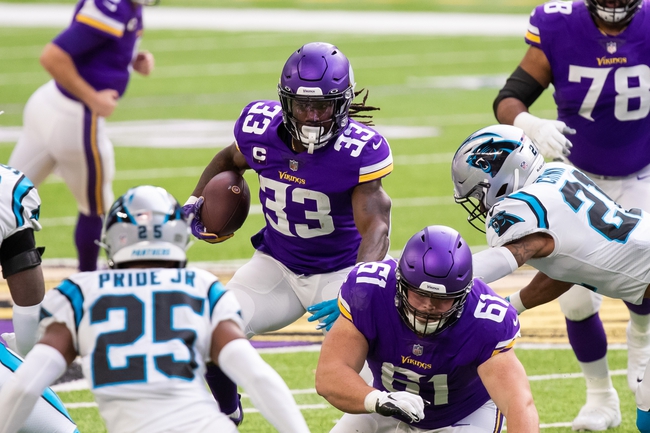 The Minnesota Vikings take on the Jacksonville Jaguars in week 13 NFL action from U.S. Bank Stadium in Minneapolis on Sunday afternoon.

The Jacksonville Jaguars come into this one looking to snap an ugly 10-game losing streak, falling to 1-10 after a 27-25 loss to Cleveland last time out. Mike Glennon’s thrown for 235 yards and 2 touchdowns on 57.1% passing while James Robinson has a team-high 890 rushing yards and 6 touchdowns this season. DJ Chark Jr. has a team-high 41 catches for 534 yards and 4 touchdowns while Keelan Cole Sr. has 497 receiving yards with 4 scores as well. Laviska Shenault Jr. and Chris Conley each have 300+ receiving yards as well this season for Jacksonville this year. On defense, Joe Schobert has a team-high 93 total tackles including 57 solo tackles while Dawuane Smoot and Josh Allen each have 2.5 sacks this season.

The Minnesota Vikings will look to build on their 5-6 record after a 28-27 win over the Carolina Panthers last time out. Kirk Cousins has thrown for 2,768 yards, 23 touchdowns and 11 interceptions on 68.1% passing while Dalvin Cook has rushed for 1,130 yards and 13 touchdowns this season. Alexander Mattison has 338 rushing yards while Justin Jefferson leads Minnesota’s receiving group with 52 catches for 918 yards and 6 touchdowns while Adam Thielen has 49 catches for 646 yards and 11 touchdowns. Kyle Rudolph has 334 receiving yards and the aforementioned Cook has 255 yards through the air. Irv Smith Jr., Bisi Johnson and Chad Beebe each have 100+ receiving yards this season. Eric Kendricks leads the Minnesota defense with 107 total tackles including a team-high 69 solo tackles as well as 3 interceptions while Eric Wilson and Harrison Smith each have 3 picks as well. Yannick Ngakoue also has a team-high 5 sacks for the Vikings this season.

Sure, the Jags almost went to overtime against the Browns, but let’s face facts. This is still a bad Jaguars team that’s lost ten games in a row. I’m also not trying to back a team with Mike Glennon as its starting quarterback because that can only take you so far before it starts to backfire. Minnesota’s battling back after a bad start and Dalvin Cook is just too much of a difference maker to struggle against this horrendous Jacksonville defense. I’ll lay the points with Minnesota in this spot.