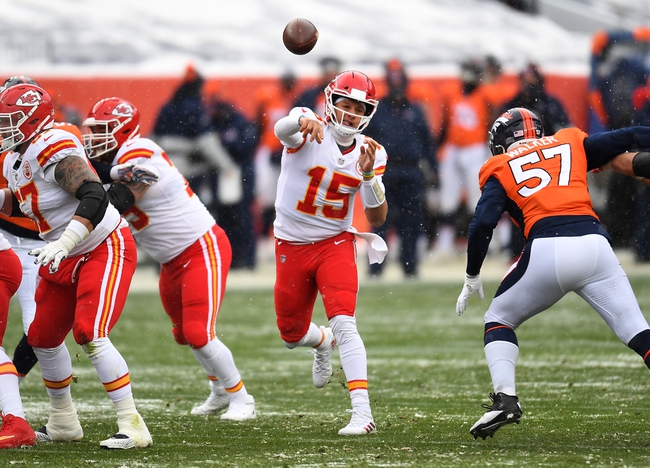 The Kansas City Chiefs meet up with the Denver Broncos Sunday in Week 13 NFC West NFL action from Arrowhead Stadium in Kansas City.

Denver comes into this one at 4-7 on the season so far. The Broncos are 1-3 in their last four games, with a win over the Dolphins alongside losses to the Falcons, Raiders and Saints. As for the Chiefs, they’re 10-1 this year. Kansas City is riding a six-game win streak right now, taking out the Panthers, Raiders and Buccaneers in their last three. Check back all season long for free NFL picks at Sports Chat Place.

Denver has had a few nice wins this year, but overall the team has been choppy and underwhelming. During the Broncos’ current 1-3 run, they’ve lost to the Falcons 34-27, the Raiders 37-12, then beat the Dolphins 20-13. Last Sunday Denver got back into the loss column with a 31-3 result against the Saints.

In the loss to New Orleans, Denver quarterback Kendall Hinton was just 1-of-9 for 13 yards and two interceptions. Royce Freeman carried eight times for 50 yards to lead the rush, and Noah Fant caught the only pass for 13 yards.

In the win over Tampa Bay last Sunday, Kansas City quarterback Patrick Mahomes posted 462 yards with three touchdowns, and Clyde Edwards-Helaire rushed 11 times for 37 yards. Tyreek Hill had a monster game with 13 touchdowns for a whopping 269 yards and three scores.

PICK: I’m going Chiefs, even though that line is pretty darn thick. It’s tough to rationalize taking Denver in this one, especially following that downright abysmal offensive performance versus the Saints. The Broncos posted just 112 total yards there, with a 2.6 yards-per-play average, three turnovers, only six first downs and an ugly 1-of-10 mark on third-down efficiency. There’s pretty much nowhere to go but up for the Denver offense, but I think KC still covers here.