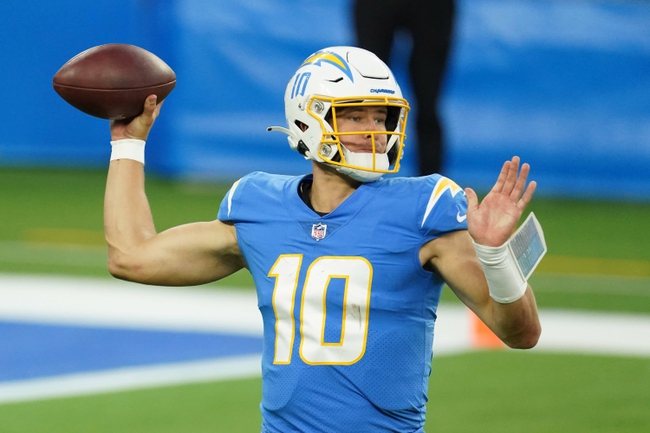 The Atlanta Falcons will look to bounce back after a 21-16 loss to the New Orleans Saints in their last outing to fall to 4-8 this season. Matt Ryan has thrown for 3,436 yards, 18 TDs and 8 interceptions on 63.5% passing while Todd Gurley II has 628 rushing yards with 9 touchdowns and Brian Hill has 334 rushing yards. Calvin Ridley leads Atlanta’s receiving group with 905 yards and 7 touchdowns on 59 catches while Julio Jones has 771 receiving yards with 3 scores and Russell Gage has 522 receiving yards. Hayden Hurst has also contributed 468 receiving yards for the Falcons this season. On defense, Foyesade Oluokun leads Atlanta with 87 total tackles including a team-high 58 solo tackles while Deion Jones has 3.5 sacks and a pair of interceptions.

The Los Angeles Chargers could use a win after losing five of their last six games following a 45-0 rout at the hands of the New England Patriots in their last game. Justin Herbert has thrown for 3,224 yards, 23 touchdowns and 9 interceptions on 64.8% passing while Joshua Kelley leads the Chargers in rushing with 346 rushing yards and 2 touchdowns. Austin Ekeler also has 328 rushing yards while Kalen Ballage has 215 rushing yards for the Chargers. Keenan Allen leads the Chargers in receiving with 90 grabs for 923 yards and 7 touchdowns while Mike Williams has 572 receiving yards with 4 scores and Hunter Henry has 507 receiving yards with 3 TDs. Jalen Guyton also has 369 receiving yards while the aforementioned Ekeler and Tyron Johnson each have 200+ receiving yards for Los Angeles this season. On defense, Kenneth Murray Jr. leads the way with 81 total tackles including 50 solo tackles while Rayshawn Jenkins has a team-high 51 solo tackles and Joey Bosa has a team-high 7.5 sacks this season.

I’m not sure how eager I am to back a side in a game between two teams that have had the inability to get out of their own way at times this season, so the over could be worth a look. However, how the Chargers haven’t made a coaching change with all of the questionable decisions made this week is beyond me, and the Falcons have been playing noticeably better under Raheem Morris which still feels a bit odd to say. And when you factor in that Atlanta’s only two losses in the last five week have come against the 10-win, division leading New Orleans Saints, it’s not really something to sneeze at. Until the Chargers get rid of Anthony Lynn and bring in a new head coach, I want nothing to do with this team, even if Justin Herbert is showing promise as the team’s QB of the future. I’ll lay the points with Atlanta in this one.