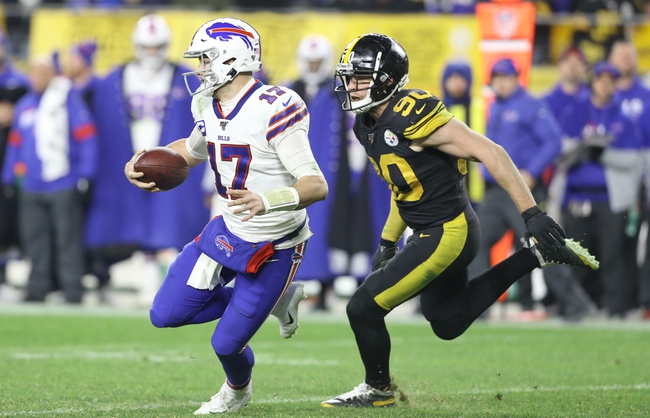 The Buffalo Bills face off with the Pittsburgh Steelers Sunday in week 14 NFL action at Bills Stadium in Orachard Park.

The Buffalo Bills look for their third straight win to build on their lead in the AFC East. The Buffalo Bills have won five of their last six home games. Josh Allen is completing 69.9 percent of his passes for 3,403 yards, 26 touchdowns and eight interceptions. Allen has two or more touchdown passes in nine of his last 12 games. Stefon Diggs and Cole Beasley have combined for 1,834 receiving yards and eight touchdowns while Gabriel Davis has 25 receptions. The Buffalo Bills ground game is averaging 102.4 yards per contest, and Devin Singletary leads the way with 544 yards and one touchdown. Defensively, Buffalo is allowing 25.5 points and 375.5 yards per game. Jordan Poyer leads the Buffalo Bills with 100 tackles, AJ Klein has five sacks and Tre'Davious White has three interceptions.

The Pittsburgh Steelers are still one of the best defensive teams in the league, but they've been barely skating by during this 11-1 season and a loss was going to creep in eventually given how much they played down to their competition. The Buffalo Bills could easily be riding a six-game winning streak right now if they defended a Hail Mary in Arizona, and they have the third best passing attack in the NFL, with Allen topping 300 passing yards in three of his last six games. Maybe the Steelers loss gets them refocused for a game like this under the bright lights, but the Bills have been the steadier team overall and has done a better job of putting teams away.

I'll take the Bills in the underdog role in a game they should win outright.