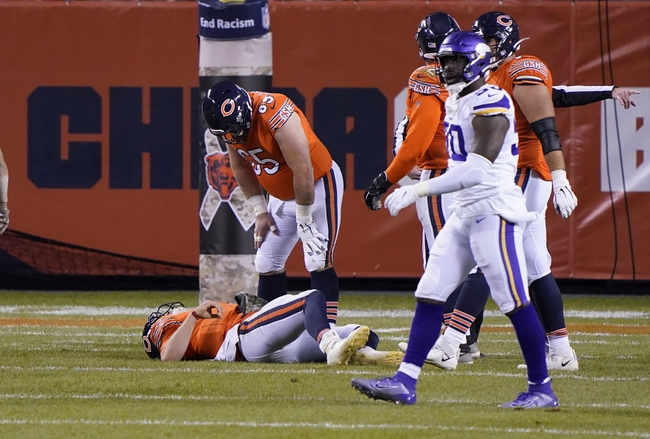 The Chicago Bears could use a win here after losing six of their last seven games. The Chicago Bears have lost three straight road games. Mitchell Trubisky is completing 63.8 percent of his passes for 1,336 yards, 13 touchdowns and five interceptions. Nick Foles and Trubisky have combined for 23 touchdown passes and 13 interceptions this season. Allen Robinson II and Darnell Mooney have combined for 1,477 receiving yards and nine touchdowns while Anthony Miller has 44 receptions. The Chicago Bears ground game is averaging 93.2 yards per contest, and David Montgomery leads the way with 760 yards and four touchdowns. Defensively, Chicago is allowing 22.4 points and 347.5 yards per game. Roquan Smith leads the Chicago Bears with 122 tackles, Khalil Mack has 7.5 sacks and Tashaun Gipson Sr. has two interceptions.

The Chicago Bears are coming off a surprising blowout win over the Texans and have quietly now scored 66 points in their last two games after once struggling to score points. The Minnesota Vikings have been a completely different team since their bye week in week 7, but four of their last five wins have been decided by six or less points. The Bears have a shot in this contest assuming the offense continues to produce, but we're not being asked to lay a lot of points and the Vikings are still clearly the better team here no matter how you slice it. Hard not to side with the Vikings at home given the small chalk.