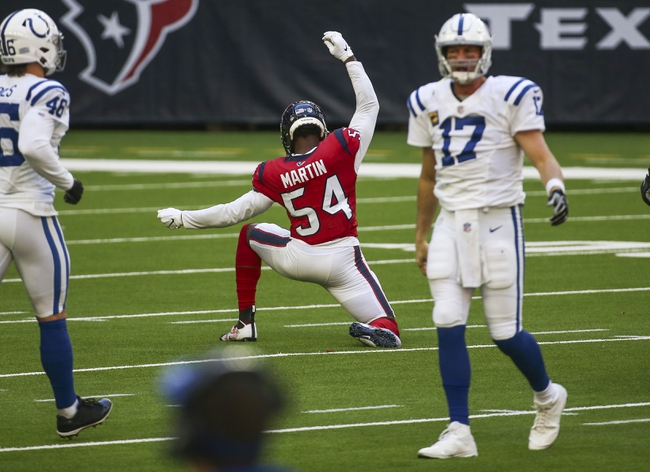 The Indianapolis Colts face off with the Houston Texans Sunday in week 15 AFC South NFL action at Lucas Oil Stadium in Indianapolis.

The Houston Texans look for a win after splitting their last six games. The Houston Texans have lost five of their last seven road games. Deshaun Watson is completing 68.9 percent of his passes for 3,761 yards, 25 touchdowns and six interceptions. Watson has two or more touchdown passes in eight of his last 11 games. Will Fuller V and Brandin Cooks have combined for 1,663 receiving yards and 11 touchdowns while Randall Cobb has 38 receptions. The Houston Texans ground game is averaging 86.2 yards per contest, and David Johnson leads the way with 452 yards and four touchdowns. Defensively, Houston is allowing 27.6 points and 406.6 yards per game. Zach Cunningham leads the Houston Texans with 127 tackles, JJ Watt has five sacks and Bradley Roby has one interception.

The Houston Texans have scored just seven points in two of their last five games and they've been one of the worst covering teams in the league. The Indianapolis Colts are coming off one of their better wins of the season and have scored no less than 26 points in each of their last five games. These teams played a couple of weeks ago and it was a competitive contest that was decided by just six points. Still, it's hard to get behind the Texans right now, a team that's falling apart and now can't score. Give me the Colts by double digits.