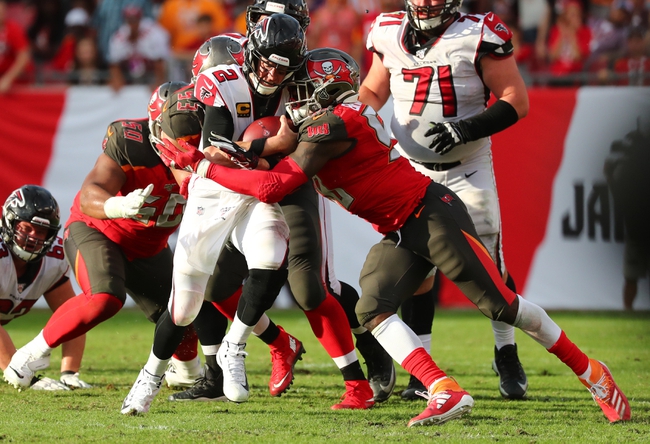 The Atlanta Falcons face off with the Tampa Bay Buccaneers in week 15 NFL NFC South action from Mercedes-Benz Stadium in Atlanta on Sunday afternoon.

The Tampa Bay Buccaneers will look to add another notch to their 8-5 belt after picking up a 26-14 win over Minnesota last time out. Tom Brady has thrown for 3,496 yards, 30 touchdowns and 11 interceptions on 64.8% passing while Ronald Jones II leads the Bucs in rushing with 900 rushing yards and 6 TDs. Mike Evans leads Tampa Bay’s receiving group with 669 receiving yards and 11 touchdowns on 51 catches while Chris Godwin also has 51 catches for 587 yards and Rob Gronkowski has 38 catches for 507 yards and 5 scores. Scotty Miller has 462 receiving yards and Antonio Brown has 217 receiving yards while five other pass-catchers for Tampa Bay have at least 100+ receiving yards this season. On defense, Devin White leads the Bucs with 118 total tackles including a team-high 77 solo tackles and 5 sacks while Jason Pierre-Paul has a team-high 9.5 sacks and Shaquil Barrett has 8 sacks and Ndamukong Suh has 5 sacks this season. Carlton Davis also leads Tampa Bay with 4 interceptions as well this season.

The Atlanta Falcons will simply try to get a confidence builder win after dropping to 4-9 on the year after a 20-17 loss to the Los Angeles Chargers last time out. Matt Ryan has thrown for 3,660 yards, 19 touchdowns and 11 interceptions on 63.7% passing while Todd Gurley II leads Atlanta in rushing with 645 rushing yards and 9 TDs and Brian Hill has 337 rushing yards with a touchdown as well this season. Calvin Ridley leads Atlanta’s receiving group with 67 catches on 108 targets for 1,029 yards and 8 touchdowns. Julio Jones has 771 receiving yards with 3 scores and Russell Gage has 605 yards while Hayden Hurst has 475 receiving yards for the Falcons this year. On defense, Foyesade Oluokun leads the Falcons with 97 total tackles including a team-high 66 solo tackles and 3 sacks while Deion Jones has a team-high. Grady Jarrett, Steven Means and Charles Harris all have 3 sacks for the Falcons this year.

I’d like to give the Falcons at home a shot here as tempting as it may to stick it to their division rival in the playoff race, but the fact of the matter is that Atlanta continues to struggle and put consistent results together while the Bucs have to keep winning games to bolster their playoff positioning and the Falcons well, they’re just going to show up and hope for the best, I’ll lay the points with Tampa Bay in this one.