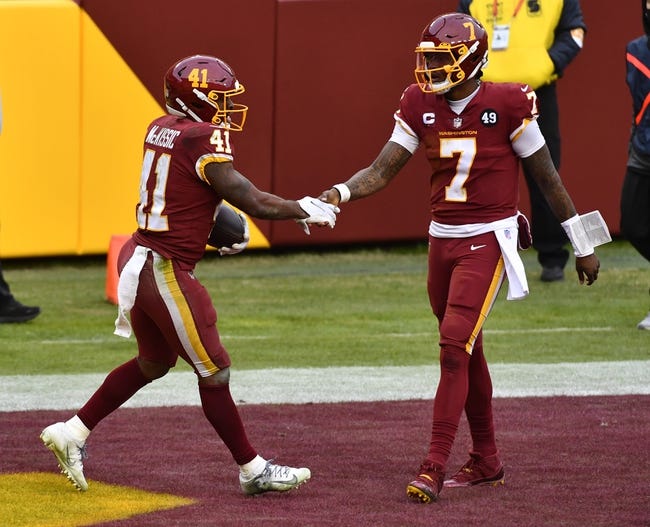 Carolina enters this one at 4-10 on the year. The Panthers have lost three straight games, falling to the Vikings, Broncos and Packers in that span. As for Washington, they’re 6-8 so far. The Team had a four-game winning streak snapped by the Seahawks in their last outing. Check back all season long for free NFL picks at Sports Chat Place.

Carolina has had a rough season, but the good news is that the team has been competitive overall. The Panthers have posted nice efforts against teams like the Saints (27-24 loss) and Chiefs (33-31 loss). Each of Carolina’s last three losses have come by eight points or fewer, including Week 15’s 24-16 defeat by the Packers.

In the loss to Green Bay, Carolina quarterback Teddy Bridgewater posted 258 yards on 21-of-35 passing, also rushing four times for 26 yards and a score. Mike Davis led the rush on 14 carries for 59 yards, and DJ Moore added six grabs for 131 yards.

Over on the Washington side, they’re sitting atop the division—even with a losing record. The Team rattled off wins over the Bengals 20-9, the Cowboys 41-16, the Steelers 23-17 and the 49ers 23-15. Washington couldn’t keep it going in Week 15 however, falling 20-15 to the Seahawks.

In the loss to Seattle, Washington quarterback Dwayne Haskins posted 295 yards with one TD and two picks, while JD McKissic led the rush on 51 yards from 13 carries. Logan Thomas was the top receiver there with 13 catches for 101 yards.

PICK: I’m going with Carolina here. Washington looked pretty good during that winning streak, taking out a couple of solid teams and spoiling the Steelers’ undefeated campaign. The Team’s last three games have been close affairs though, each decided by eight points or fewer. The Panthers haven’t been great at closing out games this season, but they’ve been able to hang with just about everyone they step on the field with. This should be a pretty competitive game, and I like Carolina to hang around for the cover/win.