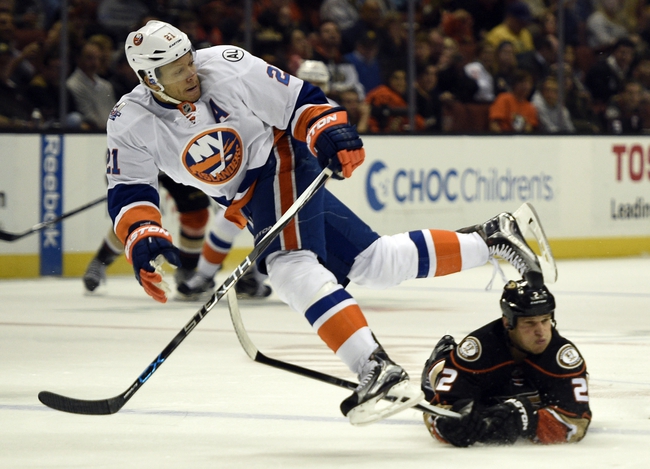 NHL Daily Updates: Checking in on the Latest News, Daily Schedule and More

The NHL is back with a fairly busy schedule this evening. We’ve got eight matchups to look forward to, but in the meantime let’s visit some of the key players and stats in the news right now.

Kyle Okposo, RW, NY Islanders: The Islanders have been on a roll lately, and they put up a nice effort at Barclays Center last night against the Coyotes. Okposo had three assists in the 5-2 win, while John Tavares posted a goal and an assist in a solid line for him as well. Jaroslav Halak made 31 saves in net.
The Islanders are now 10-6-3 on the year and have won three of their past four outings. They’d scored just six goals in their previous four home games before this.

Carl Hagelin, LW, Anaheim Ducks: The Ducks scored three unanswered goals last night in the second and third periods against the Hurricanes, leading to a 4-1 victory at PNC Arena. Ex-Ranger Carl Hagelin had just two points coming into this game, but he bagged a goal and two assists to help carry the team. Shawn Horcoff put up a goal and an assist as well, and Anton Khudobin put up 24 saves.
The Ducks are now 6-8-4 on the year so far.

Tomas Tatar, LW, Detroit Red Wings: Tatar got to play the hero last night in Ottawa at Canadian Tire Centre against the Senators, scoring the game-winning goal at 2:04 of overtime. His shot sent the Red Wings to a 4-3 victory.
Detroit blew both 2-0 and 3-1 leads in this game, and should be happy to get out of there with a win. They’re 9-8-1 on the season so far. Ottawa is 8-5-5.

Roberto Luongo, G, Florida Panthers: If you like low-scoring defense-centric hockey with a ton of great net saves, this one was for you. Luongo pitched a shutout against the Lightning at BB&T Center last night, helping his team to a 1-0 victory.
Aaron Ekblad scored the lone goal here with a lucky ricochet off a skate.
The win was No. 407 on Luongo’s career. He’s tied for eighth place with Glen Hall on the all-time list in the NHL.

NHL Daily Schedule: Here’s the league’s daily schedule. Let’s check out the matchups, times and channels where you can find all the action.