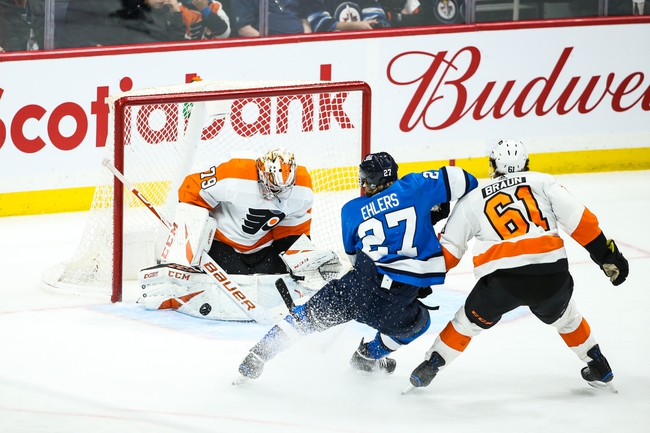 The Winnipeg Jets and the Philadelphia Flyers meet in NHL action from the Wells Fargo Center on Saturday afternoon.

The Winnipeg Jets will look to build on their three-game winning streak after a 5-1 win over Ottawa in their last outing. Ottawa opened the scoring with just over eight minutes to go in the 1st period before Mark Scheifele single-handedly gave Winnipeg a 2-1 lead with a pair of goals 1:11 apart later in the 1st period. Kyle Connor and Nikolaj Ehlers pushed the lead to 4-1 with a pair of goals 1:02 apart and Scheifele completed his hat trick late in the 3rd to lock up the win for the Jets. Laurent Brossoit got the win to improve to 6-7-0 on the year after stopping 29 of 30 shots faced in the winning effort.

The Philadelphia Flyers will be looking to build on back-to-back wins after a 4-3 overtime win over Columbus last time out. Columbus took the lead just :41 into the game and doubled their lead just after the nine-minute mark of the 2nd period before Travis Konecny got the Flyers on the board just :23 later. Columbus restored the two-goal lead less than four minutes into the 2nd before Nicolas Aube-Kubel and Claude Giroux scored 1:26 apart to tie the game at three late in the 2nd period. Both sides had their chances in the 3rd but neither could produce a winner, so it was off to OT where Kevin Hayes potted the winner for the Flyers with just over a minute to go in the extra frame. Brian Elliott got the win to improve to 15-7-4 on the year after stopping 28 of 31 shots faced in the winning effort.

You could make a case for either of these teams and maybe the line should be closer to a coin flip given that both sides have won 7 of their last 10 games. However, Philadelphia has been lights out for the most part at home this season, and historically the Flyers have had Winnipeg’s number. The home team has also won 13 of the last 16 meetings between the two sides. Both teams are solid on the puck line and I think it’s a one goal either way you slice it, but I’ll lay the juice with Philadelphia mainly because of how good they’ve been at home.