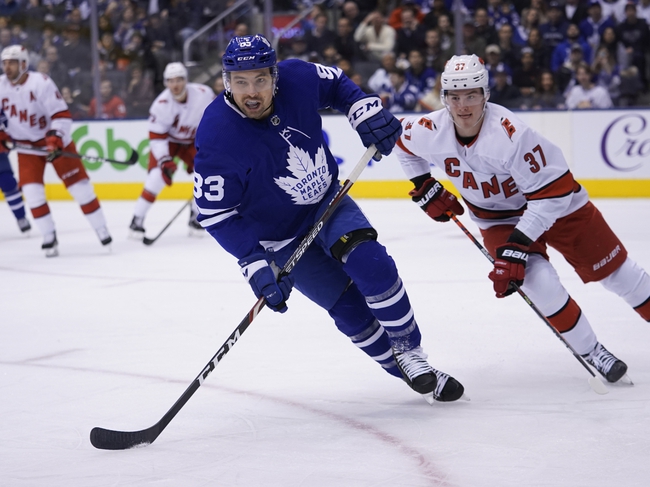 The Carolina Hurricanes and the Toronto Maple Leafs meet in NHL action from Scotiabank Arena on Saturday night.

The Carolina Hurricanes will look to bounce back on a quick turnaround after a 5-2 loss to the New York Rangers last time out. New York opened the scoring with the lone goal of the opening period before Brock McGinn tied the game at one just over three minutes into the 2nd period. New York retook the lead just before the midway point of the 2nd and went up 3-1 with just under four minutes to go in the middle frame. The Rangers pushed the lead to 4-1 just after the first minute of the 3rd before Sebastian Aho pulled a goal back just over four minutes later. That’s as close as Carolina got the rest of the way, as the Rangers iced the win with an empty net goal with just under a couple of minutes to go. Petr Mrazek took the loss, falling to 20-16-2 on the year after giving up 4 goals on 35 shots faced in the losing effort.

The Toronto Maple Leafs will look to build on a 4-0 win over the Pittsburgh Penguins in their last outing. The game was scoreless through the opening 20 minutes before Jake Muzzin and William Nylander staked the Leafs a 2-0 lead at the midway point of the 2nd with goals 2:15 apart. Kasperi Kapanen added a 3rd Toronto goal just 3:03 later. The lead would hold up through to the 3rd where Zach Hyman added a 4th goal for good measure just before the four minute mark of the 3rd period. Toronto stifled Pittsburgh, holding the Pens to just 2 shots on goal in the 3rd period as Toronto cruised to the win. Frederik Andersen got the win to improve to 25-12-6 on the year after stopping all 24 shots faced for his 2nd shutout of the season.

I’m tempted by the Hurricanes and plus money, as Carolina’s had success on the second half of a back-to-back lately. However, Carolina isn’t the same team on the road that they are at home, and Toronto showed some killer instinct that had been lacking in their dismantling of Pittsburgh last time up. Toronto needs to keep winning games to fortify their playoff positioning because if the Leafs fall out of the division spots, they’ll fall out of the playoff picture entirely. I just think that we see more grit from Toronto in this one, so I’ll lay the juice with the Leafs at home in this one.