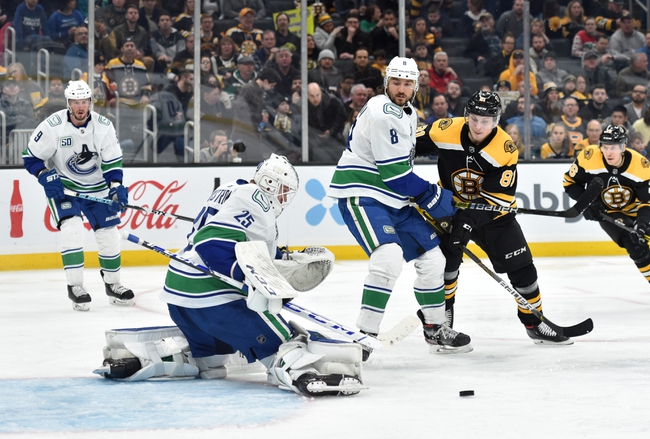 The Boston Bruins and the Vancouver Canucks meet in NHL action from Rogers Arena on Saturday night.

The Boston Bruins will look to keep their roll going after making it 5 straight wins with a 4-3 win over Calgary last time out. Calgary opened the scoring just :20 into the game and doubled the lead just 2:14 later before Patrice Bergeron responded just :24 after that. Calgary restored their two-goal cushion just :25 later but Bergeron would respond again just 2:49 later. Charlie Coyle would tie the game at three with just under eight minutes to go in the opening frame. Brad Marchand gave the B’s a 4-3 lead just :52 into the 2nd, and while it didn’t seem like it at the time, that’s all Boston needed as the Bruins cruised the rest of the way for the W. Jaroslav Halak got the win to improve to 16-6-6 on the year after stopping 18 of 21 shots faced in the winning effort.

The Vancouver Canucks will look to rebound from back-to-back losses after a 4-3 shootout loss to Minnesota last time out. Minnesota opened the scoring just over a minute into the game and would ride that lead going into the 2nd where Jay Beagle tied the game at one just 1:31 into the 2nd. Minnesota restored the lead later in the period but J.T. Miller would help the Canucks tie the game and take the lead in a span of 3:15 early in the 3rd. Minnesota would tie the game at three with just under five minutes to go, but neither side would produce a winner in the rest of regulation and OT, so it was off to the shootout where each side scored twice in the first three shooters but Minnesota was the only team to score in round 5, taking the win and the extra point that goes with it. Jacob Markstrom took the loss, falling to 22-16-4 on the year after stopping 25 of 28 shots faced in regulation and overtime.

I considered Vancouver and the plus money as the Canucks have been tough to beat at home. However, Boston has been tough to beat in general, regardless of where they play, and the Bruins are just in one of those grooves where they kist keep finding different ways to win hockey games. I just think this is another game that Boston finds a way to escape with two points, so I’ll lay the juice with Boston on the road here.