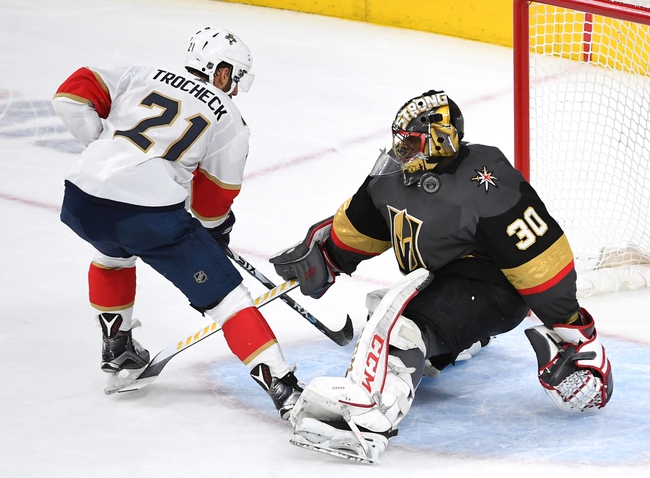 The Florida Panthers and the Vegas Golden Knights meet in NHL action from T-Mobile Arena on Saturday night.

The Florida Panthers will look to rebound from a 5-4 loss to the Los Angeles Kings in their last outing. Los Angeles opened the scoring just 1:26 into the game before Aleksander Barkov gave Florida a 2-1 lead with a pair of goals 1:40 apart. The Kings tied the game at two with just under five minutes to go in the 1st before Jonathan Huberdeau restored Florida’s lead early in the 2nd. Los Angeles surged ahead 4-3 be the end of the 2nd period before Mike Hoffman tied the game at four for Florida within the first minute of the 3rd period. The Kings would take the lead for good with just over seven minutes to go, as Los Angeles would ride the lead to victory. Sergei Bobrovsky took the loss, falling to 22-18-5 on the year after giving up 5 goals on 40 shots faced in the losing effort.

The Vegas Golden Knights will look to add to their current four-game winning streak after a 5-3 win over Tampa Bay in their last outing. Tampa Bay took the lead just over seven minutes into the game before Alec Martinez scored his first goal in a Vegas uniform with just under two minutes to go in the 1st. Paul Stastny pushed the Golden Knights back in front just before the seven-minute mark of the period but Tampa would pull a goal back with just over four minutes to go in the 2nd. Mark Stone would respond just 1:01 later and Ryan Reaves and Max Pacioretty would score :37 apart to push Vegas ahead 5-2. Tampa Bay pulled one back with two minutes to go, but it wasn’t enough as Vegas got the win. Marc-Andre Fleury got the win to improve to 24-14-5 on the year after stopping 24 of 27 shots faced in the winning effort.

The plus money with the Panthers is tempting as Florida needs this game to keep up in the playoff race, but the problem is that the Panthers have a good shot against the Kings and the Panthers just blew the opportunity for an extremely winnable game. Vegas is starting to turn it on and the new pieces are all paying dividends already. I’ll side with Vegas for the win and to get the price down, I’ll take Vegas on the puck line here.