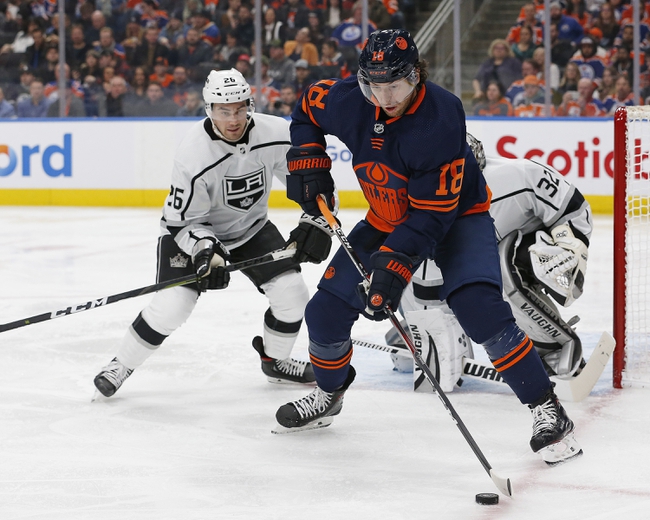 The Edmonton Oilers and the Los Angeles Kings meet in a Pacific division clash in NHL action from the Staples Center on Sunday night.

The Edmonton Oilers will look to rebound from back-to-back losses after a 5-3 loss to Minnesota last time out. Ryan Nugent-Hopkins opened the scoring for Edmonton just :50 into the game before Minnesota tied the game at one just before the midway point of the 2nd frame. Nugent-Hopkins restored the lead with his 2nd goal of the game coming with just under seven minutes to go in the first period. Minnesota tied the game again early in the 2nd before Leon Draisaitl gave the Oilers another lead just 2:13 later, but the Wild would respond again just 2:54 after that. Minnesota took the lead just past the midway point of the 2nd before icing the result with an empty-netter late in the 3rd. Mikko Koskinen took the loss for the Oilers, giving up 4 goals on 38 shots faced in the losing effort.

The Los Angeles Kings will look to rebound from a 2-1 shootout loss to the Colorado Avalanche last time out. Austin Wagner opened the scoring for the Kings with the lone goal of the opening period coming on a penalty shot. Colorado would tie the game at one with just over three minutes to go in the 2nd period. The 3rd period saw no scoring, so it was off to the shootout where Los Angeles missed all three attempts on goal while the Avs found a game winner in round three to take the extra point that comes with the victory. Jonathan Quick took the loss, falling to 13-22-4 on the year after allowing one goal on 31 shots faced in the losing effort.

I’ve gone back and forth on this game and I’m tempted by Edmonton with a reasonable line. However, as bad as the Kings have been, they’re still battling and have played their best hockey by far at home. The Oilers need McDavid in the lineup and I’m not sure I want any part of Edmonton until he returns. It’s a lean, but I’ll take a stab at L.A. and the plus money here.