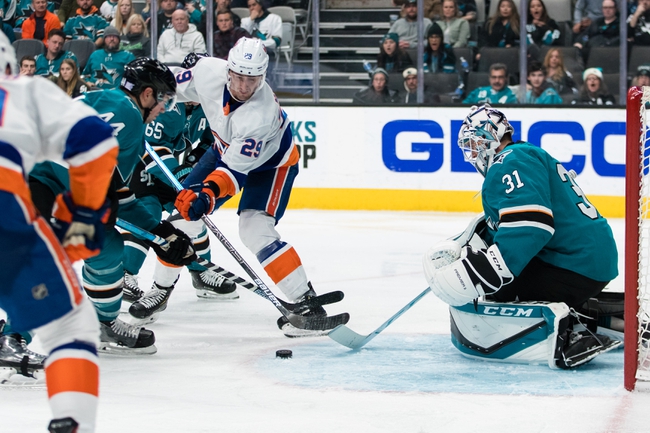 The San Jose Sharks and the New York Islanders meet in NHL action from Nassau Coliseum on Sunday afternoon.

The San Jose Sharks will be out to snap a three-game losing streak after a 3-2 loss to the New York Rangers last time out. New York opened the scoring just before the midway point of the opening period before Joe Thornton tied the game at one with just over two minutes to in the opening period. Thornton gave San Jose the lead with his 2nd goal of the game with just over six minutes to go in the 2nd but the Rangers would tie the game just 3:40 later. New York took the lead for good in the 3rd, ending up with the loss, despite outshooting the Rangers 46-33 in the loss. Aaron Dell took the loss, falling to 12-13-2 on the year after allowing 3 goals on 33 shots faced in the losing effort.

The New York Islanders will look to build on a 4-1 win over the Detroit Red Wings last time out. Jordan Eberle opened the scoring just under six minutes into the game before doubling his goal tally and the Islanders’ lead with just under three minutes to go in the 2nd. Detroit pulled a goal back with just 2:35 to go, but Eberle would complete his hat trick just 1:58 later. Leo Komarov would secure New York’s win with an empty-netter just :30 later. Semyon Varlamov got the win to improve to 18-12-4 on the year after stopping 21 of 22 shots faced in the winning effort.

The plus money with San Jose is tempting as the Sharks have played well on the road lately and a win over Detroit isn’t enough to fully say that the Islanders are back on track yet. However, The Islanders are the much better team here, and I’m not trying to figure out when the Sharks turn things around, if at all. I just think the Islanders are in the better spot here, so I’ll side with New York on the puck line here.