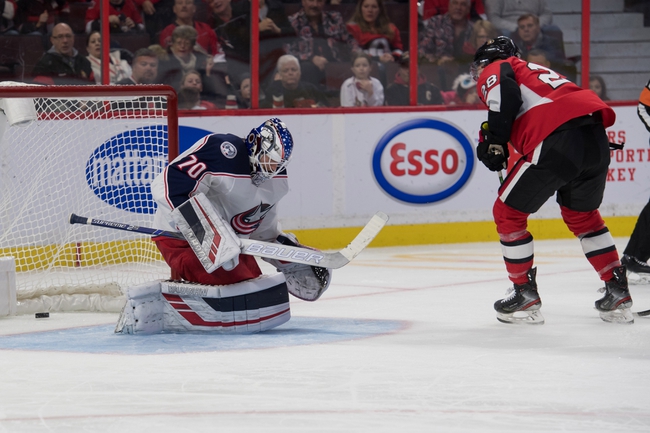 The Ottawa Senators and the Columbus Blue Jackets meet in NHL action from Nationwide Arena on Monday night.

The Ottawa Senators will look to rebound from back-to-back losses after a 3-0 loss to Montreal at home last time out. Montreal opened the scoring just 1:13 into the game before doubling the lead just after the midway point of the opening frame. The lead would hold for most of the 2nd before the Habs pushed the lead to 3-0 with just over two minutes to go in the middle frame. Ottawa outshot Montreal 10-8 in the 3rd, but the Senators wouldn’t break the seal on Montreal’s goal as they left the game empty-handed. Craig Anderson took the loss, falling to 9-14-2 after allowing all 3 goals on 37 shots faced in the losing effort.

The Columbus Blue Jackets will look to snap an ugly eight-game losing streak after a 4-3 shootout loss to Nashville last time out. Nashville jumped out to a lead just :33 into the game before going ahead 2-0 just past the midway point of the opening frame. Boone Jenner got the Jackets on the board just a minute into the 2nd and Eric Robinson tied the game at two for Columbus just 3:50 later. The Blue Jackets took the lead late in the 2nd thanks to Emil Bemstrom’s goal, but the Preds would tie the game at three with just a minute to go in the middle frame. The 3rd period couldn’t produce a winner, and neither did OT, so it was off to the shootout where both sides had a goal after three shooters and both sides would score in round 4 sudden death. We eventually ended up at round 8 before Nashville buried the shootout winner, sending the Blue Jackets back with yet another loss. Elvis Merzlikins took the loss, falling to 12-9-8 on the year after stopping 33 of 36 shots faced in regulation and OT.

This game to me as about picking the lesser of two evils, like would you rather side with Ottawa on the road, or Columbus on an eight-game losing skid. With that said, it’s not like Columbus has been rolling over and just taking the beating, as 5 of the 8 losses have gone to overtime or a shootout. Ottawa has just been a mess on the road all season long, posting a total 6-22 record away from home this season. The price tag isn’t pretty, but this is the perfect game for Columbus to break out of their slump. I’ll side with the Blue Jackets and I’ll do so in regulation to get some value out of the wager.