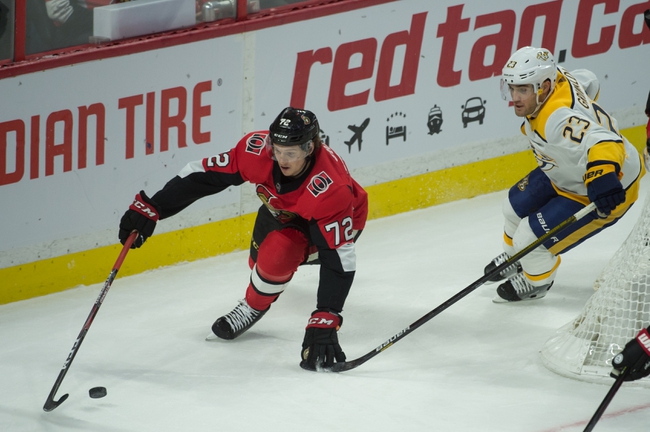 The Ottawa Senators and the Nashville Predators meet in NHL action from the Bridgestone Arena on Tuesday night.

The Ottawa Senators come into this game looking to snap a three-game losing streak after a 4-3 overtime loss to Columbus last time out. Columbus took the lead just over four minutes into the game before Connor Brown tied the game at one for Ottawa just after the midway point of the opening period. Brown made it 2-1 with his 2nd goal of the game just before the halfway mark of the 2nd, but Columbus would respond just 2:37 later to tie things up at two. Colin White gave Ottawa a 3-2 lead just over nine minutes into the 3rd but once again, the lead didn’t last long as Columbus tied the game just :29 after that. The final ten minutes didn’t produce a winner, so it was off to overtime where Columbus potted the game winner in the final minute of the extra frame. Marcus Hogberg took the loss, falling to 3-7-8 on the year after allowing all 4 goals on 45 shots faced in the losing effort.

The Nashville Predators will try to build on a 4-3 shootout win over Columbus last time out. Ryan Johansen opened the scoring for the Predators just :33 into the game before doubling the lead just after the midway point of the first period. Columbus pulled one back just a minute into the 2nd and tied the game just before the five minute mark of the 2nd. The Blue Jackets took a 3-2 lead later in the 2nd, but Colton Sissons would tie the game at three just 1:36 later. The third period didn’t produce a winner and neither did the overtime that followed, so it was off to the shootout where both teams scored one of their first three attempts and both scored in round four of sudden death. We ended up in round 8 of the shootout before Rocco Grimaldi potted the game-winner for Nashville. Juuse Saros got the win to improve to 12-10-4 on the year after stopping 40 of 43 shots faced in regulation and overtime as well as 6 of 8 shots in the shootout.

I’ll give the Senators credit for battling hard after trading lots of key guys away at the trade deadline and narrowly falling to Columbus. However, the Senators are still a bad hockey team on the road on a back-to0back where they haven’t had a ton of luck as of late. I think this is a game where the  loss of those guys comes back to hurt, at least while the team adjusts, so I’ll side with the Predators as Nashville’s been playing way better as it is, and to get the price down, I’ll take Nashville on the puck line.