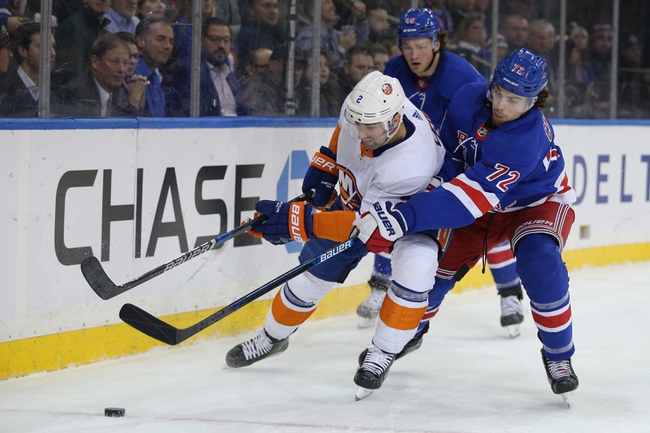 The New York Rangers and the New York Islanders meet in a Metropolitan division tilt in NHL action from the Nassau Coliseum on Tuesday night.

The New York Rangers will look to build on their current three-game winning streak after a Jesper Fast opened the scoring just before the midway point of the 1st period but the Sharks would tie the game at one with just over two minutes to play in the opening period. San Jose took the lead with just over six minutes to go in the 2nd but Mika Zibanejad would tie the game at two with just over two and a half minutes to go in the middle period. Fast scored his second of the game just under seven minutes into the 3rd to give the Rangers a 3-2 lead that they’d hold onto the rest of the way to pick up the win. Igor Shesterkin got the win to improve to 9-1-0 on the year after stopping 44 of 46 shots faced in the winning effort.

The New York Islanders will look to build on back-to-back wins after a 4-1 win over the same San Jose Sharks in their last outing. Anders Less opened the scoring just under seven minutes into the game before San Jose tied the game at one just past the midway point of the opening frame. Lee restored New York’s lead with his 2nd goal of the game just over a minute into the 2nd before Devon Toews doubled the lead with just over a couple minutes to go in the 2nd period. The Sharks tried to get back into it in the 3rd, but New York would ice the win thanks to an empty-netter from Josh Bailey with just over two minutes to play in regulation. Semyon Varlamov got the win to improve to 19-12-4 on the year after stopping 29 of 30 shots faced in the winning effort.

The Islanders being favored at home makes sense as they’ve won their last 5 home games. However, the Rangers have been playing better hockey over their last ten games, winning eight of those ten, and they’ve already taken two of three against their in-state rivals this season. I just think there’s value to be had with the Rangers here so I’ll side with the road team and the plus money in this one.