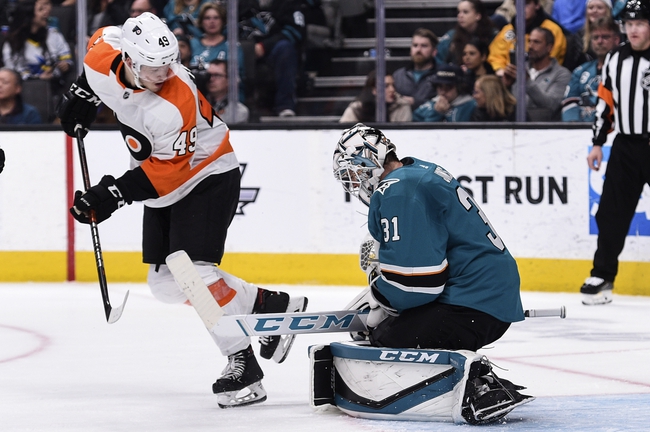 The San Jose Sharks and the Philadelphia Flyers meet in NHL action from the Wells Fargo Center on Tuesday night.

The San Jose Sharks will be out to snap a four-game losing streak after a 4-1 loss to the New York Islanders in their last outing. New York opened the scoring just under seven minutes into the game before Dylan Gambrell tied the game at one just after the midway point of the opening frame. The Isles re-took the lead just over a minute into the 2nd period and pushed the lead to 3-1 with just over two minutes to go in the 2nd. Despite the Sharks having their chances in the 3rd, San Jose wouldn’t get any closer as the Islanders locked up the win with an empty-netter with just over two minutes to play. Martin Jones took the loss, falling to 14-19-2 on the year after allowing 3 goals on 25 shots faced in the losing effort.

The Philadelphia Flyers will look to add to their current three-game winning streak after a 4-2 win over the Winnipeg Jets last time out. Scott Laughton staked the Flyers an early 2-0 lead with a pair of goals 7:57 apart, one coming just over two minutes into the game while the second came after the nine minute mark of the 1st. The lead held until the 2nd where Sean Couturier pushed the lead to 3-0 with just over five minutes to go in the 2nd period. Winnipeg pulled one back with just under two minutes to go in the 2nd and made it 3-2 just three minutes into the 3rd, but that’s as close as Winnipeg got as Tyler Pitlick restored the two-goal lead just before the midway point of the 3rd. Carter Hart got the win to improve to 19-12-3 on the year after stopping 27 of 29 shots faced in the winning effort.

This is a really thick line for Philadelphia, especially when you consider how much success the Sharks have had against the Flyers, but the fact of the matter is that these two teams are just heading in different directions right now, and the Sharks didn’t make any moves at the trade deadline to convince me that they’re serious about making an attempt at a playoff push down the stretch. The Flyers continue to be lights out at home, and I just think they flex some muscle in this one so I’ll take Philadelphia and I’ll do so on the puck line to get the price down as well.