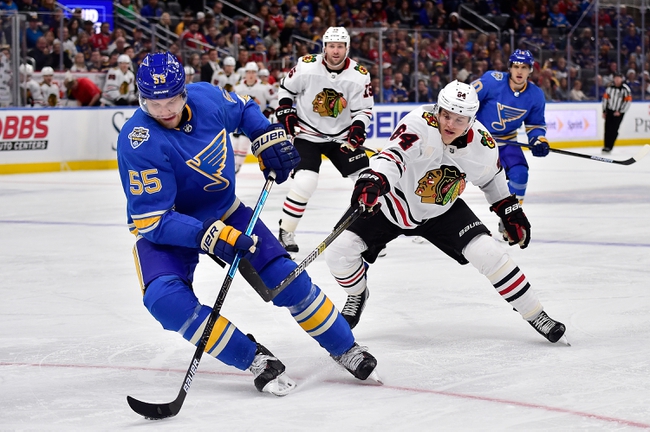 The Chicago Blackhawks and the St. Louis Blues meet in a Central division clash in NHL action from the Enterprise Center on Tuesday night.

The Chicago Blackhawks will look to rebound after suffering a 2-1 loss to the Dallas Stars in their last outing. Dallas opened the scoring with just under five minutes to go in the opening period but Dominik Kubalik would tie the game at one just over seven minutes into the 2nd period. Dallas would re-take the lead with just 3:31 to go in the 2nd period and despite having their chances in the 3rd, Chicago wouldn’t find a game-tying goal as the Stars held on for the win. Corey Crawford took the loss, falling to 11-17-3 on the year after stopping 31 of 33 shots faced in the losing effort.

The St. Louis Blues will look to add to their current four-game winning streak after a 4-1 win over Minnesota last time out. Jordan Kyrou opened the scoring with just under nine minutes to go in the opening period before doubling their lead just 3:40 later. Minnesota got on the board less than two minutes into the 2nd, but Oskar Sundqvise restored the two goal lead just before the midway point of the 2nd period. Ivan Barbashev added a 4th goal short-handed just over five minutes into the 3rd to give the Blues an insurmountable 4-1 lead that the Wild wouldn’t cut into, despite outshooting the Blues 13-7 in the final stanza. Jordan Binnington got the win to improve to 27-11-7 on the year after stopping 32 of 33 shots faced in the winning effort.

If you had given me this line just a few weeks ago with the roll Chicago was on, I’d take the plus money in a heartbeat. But right now, Chicago has me shaking my head after the trade deadline. You get yourselves into a playoff position after struggling for a good chunk of the first half, look like a team that’s primed to make an attempt at a playoff run, and then you trade Robin Lehner, arguably your number one goaltender, for draft picks and Malcolm Subban who was a questionable backup in Vegas to begin with? Chicago’s GM should be fired for that alone, but that’s another story for another day. The Blues are starting to look like the defending champions again, and are looking like they’re ready to defend their title come playoff time. I’ll side with St. Louis here and I’ll do so on the puck line as I think the Blues flatten the Blackhawks here.