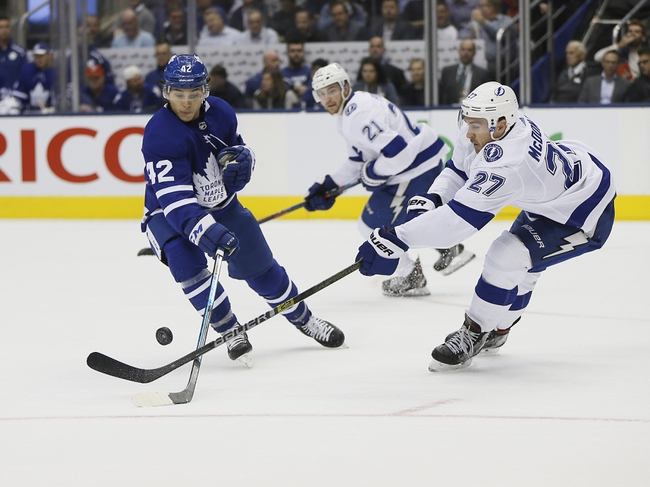 The Toronto Maple Leafs and the Tampa Bay Lightning meet in an Atlantic division matchup from the Amalie Arena on Tuesday night.

The Toronto Maple Leafs will look to rebound from a 6-3 loss to Carolina last time out. Alex Kerfoot opened the scoring with the lone goal of the first coming in the final minute of the period, but Carolina would tie the game at one just under six minutes into the 2nd and would surge ahead 3-1 with a pair of goals :56 apart. Carolina made it 4-1 just 2:28 after that, but John Tavares would pull it back to 4-2 just :19 later. Pierre Engvall made it 4-3 just 1:34 after that, but that’s as close as Toronto got as Carolina struck twice in a span of 2:51 within the first four minutes of the 3rd period, taking an insurmountable three-goal lead that they’d ride to the finish line. Frederik Andersen took the loss, falling to 25-13-6 on the year after allowing all 6 goals on 47 shots faced in the losing effort.

The Tampa Bay Lightning will look to rebound from back-to-back losses after taking a 7-3 loss to Arizona in their last outing. Anthony Cirelli opened the scoring for the Bolts just under four minutes into the opening period but the Coyotes would push ahead 2-1 with a pair of goals 1:10 apart later in the 1st period. Arizona took a 3-1 lead less than six minutes into the 2nd before Ondrej Palat and Brayden Point tied the game for the Lightning with goals 1:26 apart. The Coyotes restored the lead just :53 later and eventually surged ahead 6-3 with a pair of goals 2:37 apart. The Coyotes put the cherry on top with a 7th goal with just over a minute to go to secure the win. Andrei Vasilevskiy got the loss, falling to 32-11-3 on the year after allowing all 7 goals on 41 shots faced in the losing effort.

The Lightning deserve to be favored here given the recent roll that they’ve been on along with the fact that they’re at home. On the other hand, Toronto and the plus money is tempting given the talent that the Leafs possess, but you never really know which Toronto team is going to show up, either the team that gives up 6, or the team that wins games that most people would write them off in. Either way, I feel the best play here is the over. Both teams are capable of putting up at least 3-4 goals here, and I think we see a 4-3 or 5-3 game either way you slice it, so I’ll back the over in this game.